By Chad Raines - July 06, 2015
Currently, the New York Yankees feature a rotation of: Masahiro Tanaka, CC Sabathia, Nathan Eovaldi, Ivan Nova, and Michael Pineda. Pineda, Eovaldi, and Sabathia have been in the rotation all year, while Tanaka and Nova have only logged about 60 and 17 IPs, respectively. For the purpose of discussing run support for current starting pitchers, Adam Warren will be left out of the equation, even though he’s pitched 87 IP, the same amount as Nathan Eovaldi. 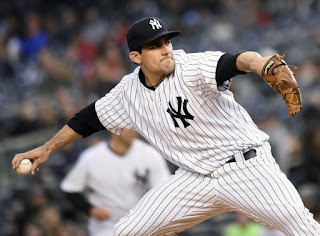 Out of all qualifying pitchers with 80 innings or more pitched this year, Nathan Eovaldi is third in the league with 7.225 runs scored by New York for every 9 innings Eovaldi pitches. There’s a reason why Eovaldi has a 4.52 ERA but holds a 8-2 record. Eovaldi has only had one scoreless outing this year; in 16 starts this year, he has at least allowed one run or more. The deepest he’s pitched into a game is a solid 7.1 innings. Even though Eovaldi has an excellent record at 8-2, his WHIP at 1.42 is extremely high and his 99 hits and 29 walks allowed in 90.0 IP is not a good track record.

Eovaldi might throw a 95+ mph in his fastball, but the lack of a strikeout pitch has hurt him. Compare his strikeout numbers with Justin Wilson; both he and Eovaldi have heaters that will overpower many hitters. Even if Eovaldi reaches a 2-strike count, he’s unable to put batters away. Eovaldi has 63 Ks in 90 IP, but Justin Wilson has 28 Ks in 29.1 IP. This is a much better ratio than Eovaldi.

One can argue that Eovaldi won his last 2 decisions where the Yankees only scored 3 runs, but his wins against the Tigers on June 20th and against the Royals on Memorial Day were both indicators that Eovaldi gets help from his offense a lot. And the one last issue about Eovaldi is simple: he is very, very hittable. Opponents, even on 0-2 counts, are hitting .242 off of him. On first pitches, opponents are hitting .465 against him! In general, hitters are batting .307 off of him. That’s inexcusable. Eovaldi has not been the Nasty Nate that the organization hoped to be, but they’ve won 10 out of his 16 starts all year. 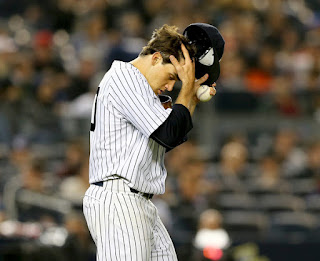 Michael Pineda has been up and down as of late, but he’s pitching well as a whole. He currently averages 5.369 runs of run support per 9 IP. He’s 8-5 with a 3.79 ERA this year. Let’s go to his first 7 starts of the year where he went 5-0. In the games he won, he gave up more than 2 earned runs just once. And in those games, the Yankees scored 4 or more runs 6 out of those 7 times. So in terms of run support, he’s definitely had his fair share.

It was only in his 5th loss of the year, which was a complete game against the Astros, that he received a lack of run support. He gave up only 3 runs, 2 earned, and the Yankees scored only 1 run. Otherwise, in 3 of his 4 other losses, he gave up 4 earned runs or more all three times. In those games, he never pitched more than 6 innings.

Pineda’s been decent in terms of opponent batting average, as they’ve hit .276 off of him in 99.2 IP. One of his best statistics is that he holds batters to a .065 batting average when there are runners in scoring position and 2 outs. That’s a key statistic that Eovaldi didn’t have. Batters hit .289 in that same scenario when Eovaldi’s on the hill. 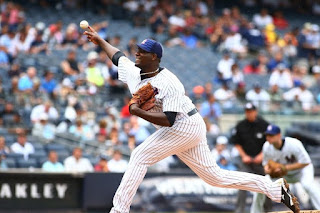 And we now conclude with CC Sabathia. He’s only getting 3.979 runs of run support per 9 IP. Joe Girardi has used this as a way to excuse Sabathia’s poor outings, but let’s examine why that excuse is not valid at all.

First, batters are hitting .257 off of him when there are 2 outs and runners in scoring position. Second, hitters are hitting .299 off of him on the season as batters have 115 H in 95 IPs. He’s also given up at least 1 HR in 12 out of his 16 starts this year. These are poor numbers already.

Now let’s dive into how his run support is really not an issue in terms of his outing results. He lost 5 of his first 6 outings. In four of those games, he gave up at least 4 earned runs in at most 7 innings. His ERA was a terrible 5.45 ERA by the end of start #6.

There can be an argument made that he’s gotten himself out of trouble, but he’s still giving up way too many hits. In his 16 starts this year, he’s given up at least 7 hits 11 out of those 16 times and 6 hits in 14 of those 16 outings. He’s completed 7 IP in only 5 of his 16 outings this year. So much for a pitcher that was supposed to have his comeback year this time around.

There’s no denying that he has been a disappointment, and no doubt that he has let the Yankees down. He may strike out batters still with his slider, but he’s getting hit in his outings more times than not. The Yankees have won only 6 games out of the 16 he’s started this year. 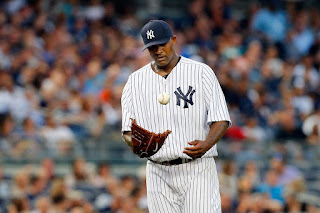 For good measure, let’s compare Dellin Betances to these 3 starters. Run support can’t be compared since Betances is a reliever. However, we can compare batting averages when there are runner(s) in scoring positions and 2 outs. Batters are hitting .048 against Betances in this scenario. That’s 1 hit in 21 AB in that scenario.

Batters are hitting .127 off of him as a whole. If he reaches a 0-2 count, batters are hitting .026 off of him after that in those at-bats. That’s 1 hit in 39 ABs. Dellin has pitched in 37 games this year for the Yankees and they’ve won 29 of those 37 games. He’s given up runs in only 3 appearances out of 37 games and has 68 Ks in 42 innings pitched. Dominant is what Dellin Betances is and there’s no doubt he should be an All-Star.