The Yankees Lose the Series Finale to Tampa With Poor Fielding

By Chad Raines - July 05, 2015
The Yankees entered Sunday’s game with a sweep in a mind. The Yankees sent Ivan Nova to the hill while the Rays started Erasmo Ramirez. Unfortunately, the Yankees came up short in game 3. 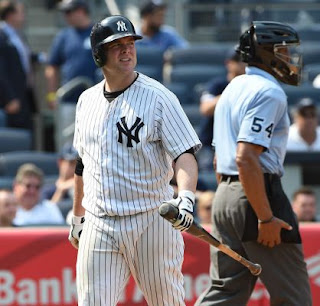 NYY 1 VS. TB 8
Instead of the Yankees scoring in the first like they usually do, the Rays did. Following a DeJesus single and Evan Longoria double, the Rays capitalized first with a Loney 2-run single into right. Erasmo Ramirez shut down a bases-loaded, two-out threat by getting Garrett Jones to ground out. Tampa added a run when catcher Curt Casali hit a sac fly to left that scored Kiermaier, who reached on a triple.

The Yankees had first and second with 2 out in the second inning but still could not do anything, as Chase Headley, who had the only Yankee hit to this point, popped out to Elmore in foul territory. The Yankees hit the ball hard in the 4th, but Jones lined out to Kiermaier and Gregorius lined out into a double play.

Curt Casali led off the 5th with a line drive double into the left field corner. Asdrubal Cabrera tried to bunt Casali, but Nova fielded the ball and THREW TO THIRD! The ball was wildly thrown, got past Chase Headley, rolled into the foul territory behind third and left. Casali scored & Cabrera advanced to second. 4-0 Rays.

Nova would depart after 5 innings and Bryan Mitchell came in. Mitchell delivered a quick, 1-2-3 inning in the 6th. And in the bottom, the Yankees finally got on the board. Alex Rodriguez hit Ramirez’s 74th pitch of the day into the left field bullpen and cut the deficit to 3. Mark Teixeira nearly went back-to-back but it was caught right in front of the scoreboard by Souza Jr. Jones hustled into second in a bloop double between left and third with two outs, but Young lost his battle against Ramirez after a long series of foul balls and a good at bat overall.

Mitchell pitched a scoreless 7th. Gardner then walked in one of the best at-bats I’ve seen, taking slider after slider off Cedeno. There were now men on first and second (Pirela reached on a strikeout/wild pitch) with 1 out. However, Headley would ground into a 1-4-2 double play started by Cedeno to end the inning. The Rays would get men on 2nd and 3rd with none out after Pirela bobbled a ground ball (that would’ve been a double play) and threw it away. Forsythe’s single added 2 runs. Rays now lead 6-1.

Chris Capuano would come in for Mitchell in the 8th after he hit Souza in the hand. He would walk Elmore and Casali (that scored Forsythe) after a Kiermaier soft ground out. Souza then scored on a Cabrera sac fly that made it 8-1. In the end, New York would lose 8-1 and the series finale.