By Chad Raines - July 10, 2015
On a partly cloudy day in Boston, the Yankees traveled north into New England to start a three-game set against the Red Sox. The Yankees sent Michael Pineda to the mound to face Clay Buchholz, which figures to be the best pitching matchup of the series. The Yankees won 5-1. 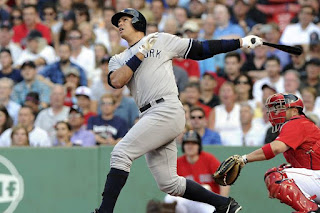 1st Inning
Alex Rodriguez wasted no time getting started in the first, hitting a solo shot to left center off Buchholz to give the Yankees a 1-0 lead. In the bottom of the first, Pineda struck out Betts and got Holt to ground out. After a Bogaerts single to left, Pineda retired Ortiz on a groundout to Teixeira.


2nd Inning
Besides singles from Jones and Drew to center, the Yankees did not threaten. In the bottom half, Pineda worked around a HBP to Napoli to end the 2nd inning.

3rd Inning
A-Rod singled, but other than that, nothing from New York. In the bottom half, Holt and Sandy Leon were on first and second with 1 out with Bogaerts at the plate. However, he grounded into a 6-4-3 double play to end the inning.

4th Inning
Leading off, McCann beat the shift to reach first. After Jones struck out, Gregorius doubled to left center to put runners on 2nd and 3rd with one out. Stephen Drew was batting when Buchholz left the game with an injured elbow. His final line was 3.1 IP, 6 H, 1 ER and 3 Ks. Stephen Drew then reached on a fielding error by Napoli but then Figueroa popped out to second. With 2 outs and the bases loaded, the Yankees scored 3 runs with the next 3 at bats. First, Ellsbury hit a ground ball to 2B Brock Holt, but he misplayed it (E5) and McCann scored. Then, Gardner hit a ground ball to 1B Napoli, but Gardner raced down the line to beat it out for an infield single. Last, A-Rod worked a full count walk to score Drew. 4-0 Yankees. After striking out Hanley Ramirez and Ortiz, Napoli and Sandoval singled with 2 outs. However, Pineda struck out De Aza and record his 5th strikeout to end the inning.

5th Inning
The Yankees went down in order. The Red Sox cut into the deficit when Mookie Betts hit his 10th HR of the year to left center. At the end of 5, Yankees led 4-1.

7th Inning
Mark Teixeira singled e with 2 outs after A-Rod and Gardner were retired, but McCann struck out swinging. Chris Young came in to play RF and replace Jones to upgrade the NYY outfield defense. De Aza reached second on a bunt single and E1 throwing error by Pineda with one out. Leon grounded out but De Aza advanced to third. With 2 out and a runner on 3rd, Justin Wilson relieved Pineda. Wilson then used a steady diet of fastballs to strike out Mookie Betts in a 8-pitch at bat. Yankees remained in the lead, 4-1.

8th Inning
RHP Matt Barnes came in for the Red Sox to start the 8th. There were men on first and second with none out after Young walked and Gregorius was hit by a pitch. LHP Craig Breslow came in to face Drew. Drew attempted to bunt but Leon threw to third to get Young out. Figueroa popped out but Ellsbury delivered again with a line drive single that scored Gregorius. Yankees now led 5-1. In the bottom of the 8th, Dellin Betances came in. Dellin being Dellin, he struck out Holt and Bogaerts and then got Ortiz to fly out harmlessly for a 1-2-3 inning.

9th Inning
The Yankees went down in order 1-2-3 in the top of 9th, facing Justin Masterson, a converted starter to a reliever. In the bottom half, Andrew Miller worked around a Cole Figueroa error that allowed Hanley Ramirez to reach first with no out. Miller struck out Sandoval, got Napoli to ground into a FC at second, and struck out pinch hitter Shane Victorino to end the game. The Yankees win Game 1 of this 3-game set, 5-1.