Top 10 Moments from the First Half of the Yankees Season

By Chad Raines - July 15, 2015
The Yankees ended the first half of the year with a record of 48-40. They were known to be an extremely streaky team, going on long stretches where they won most, if not all, of their games and then losing many in a row. The first half had its good and bad memories and here are the top ten moments from the first of the Yankee season. 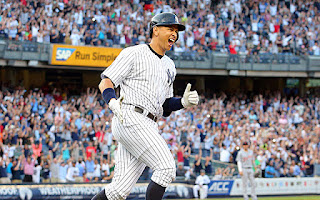 Honorable Mentions
1. April 18 (NYY 9 at TB 0) - The Yankees held its opponent scoreless only once in the first half. In its 9-0 victory over Tampa Bay, Masahiro Tanaka led the way with a 2-hit, 7-inning outing. He struck out 8 and did not allow an earned run. Many critics did not particularly have favorable words to say about Tanaka’s first two outings, but he certainly shut them up with this outing. Chris Young hit a grand slam in the 7th inning off Grant Balfour to open the game up after it was close for most of the way.

2. April 22 (NYY 14 at DET 3) - On a 38-degree night, the Yankee bats exploded against Detroit SP David Price. The Yankees scored 8 times by the second inning to put the Yankees ahead for good. McCann and Headley both had triples. Chris Young continued his red hot start with 3 RBIs, Teixeira hit his 5th HR of the year, and the Yankee bats collected 15 hits.

#10 - Tanaka’s Stellar Return in Seattle (June 3rd - NYY 3 @ SEA 1)
Masahiro Tanaka landed on the disabled list after his April 23rd start at Detroit. His stint on the DL lasted almost 6 weeks and there were concerns on whether he needed Tommy John to correct the issue once and for all. There were also concerns on whether or not he would return the same way as he had departed. However, his outing on June 3rd shut down all critics. He was efficient, using 78 pitches for 7 innings and allowing only 3 hits and one earned run. The Yankees completed a sweep and also left Seattle happy as Tanaka had pitched well in his return.

#9 - Yankees Avoid Sweep in Boston (April 12 - NYY 14 @ BOS 4)
The Yankees entered Sunday’s game against Boston with a record of 1-4. The team was not happy and the fans weren’t either. They were in danger of being swept in Boston by the Red Sox. However, the bats wasted no time getting to work. In the first inning, the Yankees put a 7-spot on the board. A-Rod’s bases-clearing double, followed by Headley and Drew’s home run cemented the Yankee lead and allowed the Yankees to walk away from Boston without being swept. Every Yankee starter had a hit. A-Rod and Headley combined for a double, HR, and 7 RBIs.

#8 - Yankees Score 11 Runs in the First Two Innings against KC (May 25th - KC 1 @ NYY 14)
The Yankees were swept embarrassingly over the weekend by the Texas Rangers and had a quick turnaround in a day game against the Royals on Memorial Day. The Yankees wasted no time getting to Guthrie. The Yankees homered four times in the first two innings and racked up eleven runs. First, it was a 2-run HR by Headley, then McCann’s 3-run HR, and lastly, Gardner’s line drive 3-run HR into right field. For good measure, Stephen Drew drilled another 3-run home run that went deeeeep into right in the second.

#7 - Alex Rodriguez’s #660 and #661 HR (May 2 & May 7)
Alex Rodriguez had been chasing Willie Mays during the first month of the year, trying to catch the then-fourth place leader in career home runs. He first tied Mays in Boston. In the 8th inning and the game tied, A-Rod came to the plate against Junichi Tazawa. He took 3 straight balls before drilling Tazawa’s 3-0 pitch over the Monster. The line drive disappeared over the wall before the MLB Network commentator could even comment on the home run. (Exit velo!) Then, 5 days later, the Yankees returned home. And it didn’t take long - in the 3rd inning, A-Rod hit another drilled line drive into Monument Park - this time #661 and surpassing Mays - off Chris Tillman of the Orioles.

#6 - Drew’s Pinch Hit Grand Slam in Baltimore (April 13 - NYY 6 @ BAL 5)
The Yankees struggled against Wei-Yin Chen and were down 4-2 in the 7th inning. The bases were loaded with 2 outs after Young, Murphy, and Ellsbury reached out 2 singles and a walk. Brett Gardner had been hit earlier in the game by Chen and he told manager Joe Girardi that he didn’t know if he could deliver the big hit the Yankees needed. Girardi therefore summoned Stephen Drew and he delivered. He hit a pinch-hit grand slam into right center off Tommy Hunter to give New York the lead, and eventually, the win.

#5 - Drew’s Tying Single & Jones’s Go-Ahead HR at Seattle (June 2 - NYY 5 @ SEA 3, F/11)
The Yankees were down 3-2 in the 9th inning. There were runners on the corners with 2 out and Mariners closer Fernando Rodney was on the hill. Everyone’s favorite player, Stephen Drew, came to the plate. Many fans probably shut off the TV in anticipation of another out. However, Drew delivered (like he did in Moment #6). Drew doubled into the right field corner and tied the game at 3. Then, in the 11th, Garrett Jones hit a go-ahead 3-run HR deeeep into right field to give New York the win.

#4 - Yankees Sweep the Red Sox in Boston for the 1st Time in 9 Years (May 1-3)
On Friday night, the Yankees won thanks to A-Rod’s tie-breaking and record-tying 660th home run off Tazawa that gave New York the 3-2 win. Then, the Yankees won the Saturday game by a score of 4-2 thanks to a 2-run, tiebreaking Gardner single and Young home run. The Yankees then attempted to sweep the Red Sox for the first time in Boston since 2006. They jumped out to a 8-0 lead before Boston roared back to score 5 runs in the 6th inning. In the 9th, drama ensued. David Ortiz came up with the bases loaded against Yankees closer Andrew Miller. With the clock ticking to midnight, Ortiz hit an extremely hard liner but directly to CF and the game was over.

#3 - Michael Pineda’s 16 Strikeout Game (May 10 - BAL 2 @ NYY 6)
The Yankees were looking for a series win in the finale of a 4-game set against the Orioles. In probably the best game of his career, Pineda struck out 16 batters in 7 innings to move his record to 5-0. He struck out the side in the 2nd and 5th innings and recorded 2 of the 3 outs by strikeout in all 7 of his innings pitched.

#2 - Alex Rodriguez’s 3000th Hit (June 19)
A-Rod had been on pace to reach 3000 hits sometime in the 2nd half, as many experts predicted. No one could’ve thought that he would have 12 HR and 34 RBIs and an average around .285 2 months into the year. Well, he did. And Yankee fans awaited on this Friday evening for A-Rod to deliver. And on Justin Verlander’s first-inning fastball and first pitch to A-Rod, well, he never got the ball back. A-Rod drilled that pitch into the right field stands for a HR and his 3000th hit, just like the Captain did a couple years back.

#1 - Brian McCann’s 3-Run, Walk-Off HR against TB (July 3 - TB 5 @ NYY 7, F/12)
The Yankees struggled all night against Chris Archer and were down 3-0 in the 8th. After Gardner struck out, Headley and A-Rod innocently singled to set up runners on first and second with 1 out. Then, All-Star Mark Teixeira stepped up and promptly drilled a 3-run HR into the right field seats, tying the game at 3. In the 12th, Chasen Shreve allowed Tampa Bay to take the lead 5-3. The Yankees would have to rally again, and yes they did. With runners on first and third and one out, Teixeira first singled to cut the deficit to 5-4. Then, the next batter, McCann drilled Steven Geltz’s pitch into the right field stands and the Yankees would win in walk-off fashion, 7-5. 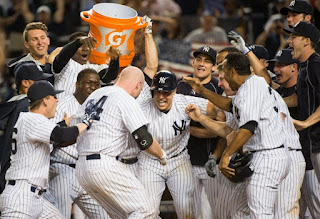 There’s no doubt the Yankees have had great success in the first half, and hopefully they will continue this in the second half. Go Yankees!