By Chad Raines - July 07, 2015
The All-Star reserves for the 2015 Mid-Summer Classic were announced Monday Night, July 6 with Yankees reliever Dellin Betances and first baseman Mark Teixeira being the only two Yankees selected. Additionally, Brett Gardner still has a shot at making it as he is one of the five players up for the last roster spot in the American League. 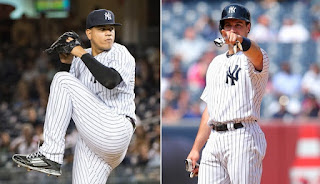 Dellin Betances was the obvious lock to be playing in Cincinnati. Following up a stellar year in 2014, Dealin’ Dellin has been just as filthy in 2015. Betances is 5-0 on the season with a 1.50 ERA. He has recorded 7 saves this year. Betances strikes out at a ridiculous 14.6 batters per nine innings pitched recording 68 K’s in 42 innings pitched. Do you see the irony there with the strikeouts and innings pitched thus far?

This will be Betances’ second All-Star game appearance as he looks to lock up the late innings in Cincinnati.

Mark Teixeira was also selected as an All-Star reserve. Granted, the injury to Miguel Cabrera likely helped Tex’s chances, but he absolutely deserved to be there. This is Mark Teixeira’s third career All-Star appearance and his second with the Yankees. Teixeira already has 20 homers and an American League Leading 59 RBIs with a .243 batting average. Finally healthy, Teixeira is back to his old self.

Fielding is where Teixeira has thrived as he’s putting together a gold-glove caliber season. Teixeira has made just two errors, both coming just three days apart on June 12th in Baltimore and June 15th in Miami. His fielding percentage sits at .997.

Notable Yankee snubs from the All-Star team include Alex Rodriguez, Brian McCann, Chasen Shreve and if he doesn’t get in, Brett Gardner. Stephen Vogt and Russell Martin were selected over McCann with Salvador Perez starting as there was a valid case for all 4 of them. Chasen Shreve has been lights out but just didn’t have the résumé that other relievers that got in have.

Rodriguez is the only hitter in the American League with an OPS of .900 plus who did not get in. Now I’m sure his past played a role in him not getting in which is a shame. From a pure numbers standpoint, he’s likely the best offense player to be left off the team and if you wanted to pick a true “snub,” you can point to A-Rod as one who in Ken Rosenthal terms was “shafted.”

So, in my mind, Dellin Betances, Mark Teixeira, Brett Gardner and Alex Rodriguez all should've been selected to the AL All-Star team. 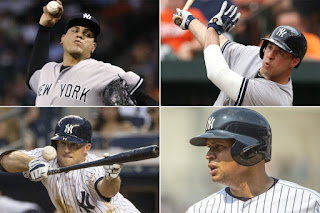 Brett Gardner still has the chance to get in and it’s up to us fans! Gardner is on the ballot as the “Final Vote” for players in the American League. Gardner is in search of his first All-Star game appearance as he is enjoying a career year with a .297 batting average, .373 on base percentage and career high .481 slugging percentage. His OPS also sits at a career best .854. Gardner also has 9 home runs, 39 RBIs, 21 doubles and 3 triples. He has stolen 15 bases in 18 attempts.

Gardner is up against tough competition in the Final Vote as he has to beat out Red Sox shortstop Xander Bogaerts, Tigers outfielder Yoenis Cespedes, Twins second baseman Brian Dozier and Royals third baseman Mike Moustakas. All players on the Final Vote are enjoying good seasons and we have all seen the opportunist Royals fans stuffing the ballots with their beloved Royals players.