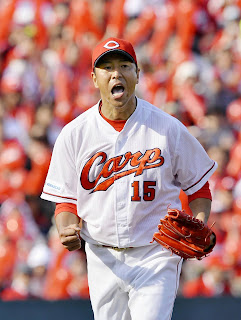 It feels like such a long time ago when Hiroki Kuroda pitched in pinstripes, but it was only last year.

As we know, Kuroda went back to Japan to pitch for the Hiroshima Carp and is actually doing pretty well. Kuroda is currently, through 14 starts, 6-4 with a 2.68 ERA through 94 innings. He’s not striking out many (62 Ks, 5.9 SO/9), but he’s not walking many either (19 BB, 1.8 BB/9). The Carp are currently 39-43 and in 5th out of six teams, but only two games out of first with the first place teams sitting at .500. It’s hard to imagine where the Yankees would be right now if Kuroda was pitching at this caliber in pinstripes, but considering Kuroda never had an ERA under 3.07 while pitching in the United States it doesn’t seem likely. Overall I enjoyed Kuroda’s time with the Yankees and I’m glad to see him still doing good at 40 years old.