What the Yankees Should Do With CC Sabathia

By Chad Raines - July 12, 2015
Unless you’ve been living under a rock you most likely know that CC Sabathia is not having the best of years. In fact, at this rate, CC Sabathia’s ERA will be a career high this year and nowhere near his career ERA of 3.69. Through 17 starts Sabathia has a 4-8 record to go along with a miserable 5.47 ERA in 100.1 innings pitched. What’s even more startling is that Sabathia has already given up 19 home runs, 2nd in the American League to the former Yankee favorite Phil Hughes. Sabathia has also had trouble putting hitters away as hitters are 12-40 (.300) on counts ending in 0-2. 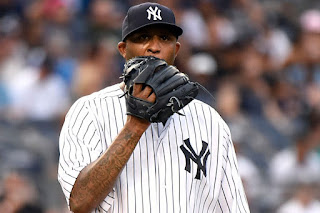 Although this will likely never happen due to the fact that Sabathia’s contract is too large and his leadership is larger, Sabathia would most likely be the most effective out of the bullpen. Although overall Sabathia’s numbers have been far from even mediocre, his RHB/LHB splits have been ridiculously different. Sabathia has been an entirely different pitcher verses left-handed batters as he’s held them to a .191 batting average and one home run over 91 plate appearances. On the other hand, right-handed batters are hitting an All-Star like .331 with 18 home runs in 344 plate appearances against the ineffective Sabathia.

Also as a reliever Sabathia would most likely not have to go through the batting order multiple times since batters are only hitting .270 in their first plate appearance, .309 in their second and .333 in their third. If Sabathia was to be slotted into the bullpen, his most effective role would be a LOOGY type (Lefty One-Out GuY), but that would make Sabathia by far the highest paid LOOGY, let alone reliever.

Even though moving Sabathia to the bullpen and into a lefty specialist role would benefit the Yankees and help the club win, we all know that’s too far-fetched. Not only that Sabathia is too expensive for such a move, it will be a crushing blow to Sabathia’s confidence so Girardi and company have their backs against the wall. The Yankees really only have one choice at this point and that is to hope Sabathia can turn it around in the second half of the season and be effective enough to not be a complete sunk cost.