With Hughes and Homers, Minnesota Stomps over New York in Game 1 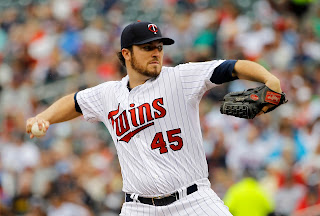 The Yankees started their ten-game road trip in Minnesota at Target Field. They will play 3 in Minnesota, 4 in Texas against the Rangers, and 3 against the Chicago White Sox. The Yankees sent Michael Pineda to the hill to face the former Yankee Phil Hughes. The Yankees lost 10-1.
Game 1 (Friday, July 24) - Yankees 1 @ Twins 10


The Yankees had Teixeira and A-Rod on the corners but could not capitalize as McCann grounded out sharply to end the inning. The Twins struck first. Miguel Sano, with two out and Torii Hunter on second, homered to center to give Minnesota the 2-0 lead after one.


The Yankees went down 1-2-3 in the 2nd. The Twins extended its lead to 3-0 when Kurt Suzuki singled home Eddie Rosario.


Neither team scored nor threatened in the 3rd.


The Twins added two runs in the 4th to extend its lead to 5-0. Trevor Plouffe singled to start the inning and then Eddie Rosario doubled to put runners on 2nd and 3rd with none out. Aaron Hicks hit a sacrifice fly that scored Plouffe and then Suzuki singled home Rosario.


Both the Yankees and Twins went down without threatening in the 5th.


Trevor Plouffe doubled to lead off the 6th and advanced to third on Rosario’s groundout. Pineda really needed an out here to keep New York in the ballgame (obviously, a slim chance of coming back). Hicks grounded out with one out. Branden Pinder relieved Pineda. Pinder succeeded by getting Suzuki to ground out and the threat was eliminated.


The Yankees had Gregorius and Headley on first and second after two consecutive singles with 2 out and a chance to cut the deficit. Stephen Drew came to the plate. Drew singled but Headley stopped at second; bases loaded, 2 out for Ellsbury. However, Ellsbury lined out and the top of the 7th was over. Torii Hunter homered for Minnesota to extend its lead to 6-0.


The Twins added 4 runs off of Chris Capuano to extend its lead to 10-0.


Jacoby Ellsbury hit a sac fly that saved the day for the Yankees against a shut out. Yankees, however, would still lose 10-1.