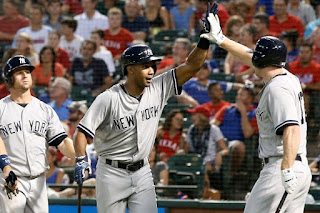 It was the second of a four game road series against the Texas Rangers for the New York Yankees. The Yankees pitched Chris Capuano to start the game, so it didn't seem like it would be a good game for the Yankees with him on the mound. The Texas Rangers started Martin Perez.

The game did not start out very good for the Yankees as expected in the first. There were two outs and only a runner on first, and it looked like the Yankees would get out of the inning but the Rangers got hot and put up 5 runs with 2 outs off of Capuano. He came out of the game at this point being replaced by Diego Moreno who was just called up by the Yankees. Capuano gave up 3 hits in 0.2 innings and 5 earned runs with 5 walks.

The Yankees powerful offense fought right back and had their own big inning in the second, scoring 11 runs and giving them an 11-5 lead. Starting with Chris Young, 8 batters got up to the plate and got on base before the Rangers even recorded an out. Mark Teixeira was the first out after the score was already 6-5 and the Yankees had 7 hits.

Chris Young, Chase Headley, Didi Gregorius and Brendan Ryan were all on base twice in the second inning. The Yankees had 10 hits this inning and 5 of them were extra base hits.

The Yankees struck again in the 3rd, getting the first 3 hitters on base and Chris Young hit a grand slam to make the game 15-5.

Chris Young had another RBI in the fourth inning when he reached on an error by Elvis Andrus. Brett Gardner scored. The game was 16-5.

The Yankees scored 3 more in the 6th inning on a Chris Young double, and a John Ryan Murphy single that scored two. The Yankees were up big time 19-5.

While the Yankees offense was absolutely lighting up the Rangers pitching, Diego Moreno was shutting down the Rangers. He threw 5.1 innings and did not give up a single hit. He walked one batter and had 5 strikeouts in a very good relief outing.

Adam Warren threw the last 3 innings and also didn't give up a hit. He got the save and he did not walk any hitters or strike any out.

The Yankees didn't score again until the 9th inning when they put up two more runs, adding salt to what was already a very bad wound for the Rangers. Jacoby Ellsbury reached on catcher's interference and Brett Gardner followed with a home run.

The Yankees came out on top of this one 21-5 winning the second game of the series and taking a 7 game lead in the AL East over the second place Orioles.