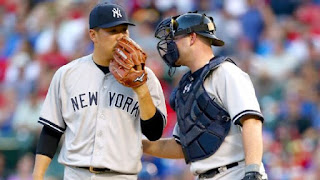 The Yankees were looking for their 5th win in a row trying to keep their offense as hot as it has been. Masahiro Tanaka started on the bump for the Yankees facing off against the Rangers Colby Lewis.


The Yankees scored first in the top of the 2nd when Carlos Beltran led the inning off with a solo home run putting the Yankees up 1-0. After getting 2 straight outs, the Yankees got 3 straight singles by Didi Gregorius, Stephen Drew, and Jacoby Ellsbury to score another run and make the game 2-0.

Neither team scored again until the bottom of the 5th when the Rangers extended their lead. Adrian Beltre led off with a single, immediately followed by a Moreland single, moving Beltre to 3rd. Josh Hamilton grounded into a double play, and Beltre scored on the play making the game 4-2.

Chosen Shreve came in to pitch for Tanaka to start the bottom of the 7th. Tanaka finished with 6 innings pitched, 9 hits, 4 earned runs, 3 walks, and 3 strikeouts. Shreve only threw 2 batters getting 1 out and allowing a walk. Caleb Cotham came in to replace him. Beltre then reached on an error by Gregorius putting runners on 1st and 2nd. Then Josh Hamilton singled to score Prince Fielder and make the game 5-2.

Cotham would pitch the rest of the game, 1.2 innings, and shut down the Rangers. He only allowed 2 hits and struck out 4. The Yankees would lose 5-2 and look to take game 4 and win the series on Thursday.