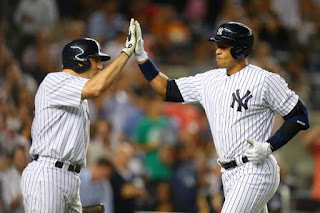 
The Yankees began a 3 games series at home on the 21st against the Orioles, a big division opponent that could help or hurt a lot depending on how they do. Nathan Eovaldi started looking for his 10th win this season facing off against Wei Yin Chen of the Orioles.

The Orioles didn't do much to start the game off with only a Manny Machado walk, who was later picked off.

Jacoby Ellsbury led off the bottom half with a ground rule double. Brett Gardner moved him over with a sacrifice bunt, and he scored on an Alex Rodriguez sacrifice fly. The Yankees lead 1-0.

2nd Inning
The Orioles went 1-2-3 with 2 strikeouts this inning.


Brian McCann lead the inning off with a backside single beating the shift. Chris Young singled him to second, then Chase Headley hit a double down the left field line to score McCann. Young moved to third. The Yankees couldn't capitalize with no outs and runners on 2nd and 3rd, with a strikeout, a popout, and a groundout following.


The Yankees also went down in order this inning.


4th Inning
Adam Jones had an infield single with 2 outs to get the Orioles first hit of the ballgame. Chris Davis then hit a hard line drive to straight away center, and Jacoby Ellsbury made a great diving catch to end the inning.


After Brian McCann grounded out to start the inning, Chris Young and Chase Headley hit back to back singles. The Yankees couldn't capitalize again when Gregorius flew out to center and Brendan Ryan grounded out.


The Yankees threatened in the 5th with Gardner reaching on an E4, and Teixeira hitting a ground rule double to left center. If the ball hadn't bounced over the wall, Gardner would have scored, but he was held up at 3rd.


6th Inning
The Orioles tied the game this inning with a few singles by Paredes, Jones, Wieters and Hardy. Justin Wilson came in with 2 outs and allowed one of the 4 hits given up this inning. Eovaldi was responsible for both runs.


With 2 outs, Gregorius singled to left. Brendan Ryan who recently came off of the DL, then doubled down the line to score Gregorius and give the Yankees a 3-2 lead.


7th Inning
Dellin Betances came in with 2 outs in the inning for Justin Wilson. The Orioles got one hit but didn't score.

The Yankees would load the bases, but couldn't get any across to keep it a 1 run game.


8th Inning
It was a quiet inning with neither team threatening

9th Inning
Andrew Miller came in and shut the Orioles down and picked up the save. The Yankees win a big division game 3-2.


GAME TWO (NYY 4 vs. BAL 3)
The Yankees started Ivan Nova in game 2 of this big divisional series against the Orioles who started Kevin Gausman. The Yankees could win the series and possibly sweep Thursday with a win this game. The Yankees came out on top in a close game 4-3.


Machado walked to lead the game off for the second straight night. He would steal second, but the Orioles wouldn't get anything out of it.


The Yankees scored 3 in the 1st off of a Brett Gardner RBI single which scored Jacoby Ellsbury who double to lead the game off. Mark Teixeira two batters later would hit his 24th home run of the season to give the Yankees an early 3-0 lead.


In the 3rd, JJ Hardy led off for the Orioles with a single, followed immediately by a Ryan Flaherty home run, bringing the deficit to 1 run. They wouldn't get any more runs across even after a Manny Machado double who advanced to third on a ground out.


The game was mostly quiet until the bottom of the 5th when Alex Rodriguez hit a deep home run over the bullpen in left center to give the Yankees a 4-2 lead.


Ivan Nova came out of the game after the 6th inning. His final stat line was 6 innings pitched, 3 hits, 2 earned runs, 3 walks, and 3 strikeouts. He also worked out of a couple tough jams to save the game. Chasen Shreve came in to relieve him. He shut down the Orioles in 1 inning of work as did Dellin Betances in the 8th inning.


Andrew Miller was in for the 9th trying to record his 22nd save of the season. He got 2 quick outs to start the inning off, but Chris Davis hit a home run to right the next at bat to make it a 1 run game in the top of the 9th. Miller would strike out Schoop to get the final out and secure another big Yankees win 4-3, putting them 5 games ahead of the 2nd place Toronto Blue Jays.

GAME THREE (NYY 9 vs BAL 3)
The Yankees went into Friday looking for the sweep against the Orioles to extend their AL East lead. Masahiro Tanaka faced off against Ubaldo Jimenez on the mound, Tanaka looking for his 7th win of the season. The Yankees scored early and often to take away a 9-3 lead to sweep the O's.


In the first inning, the Yankees put up four runs to start them off with a big lead. Jacoby Ellsbury led off with a single and Brett Gardner and Alex Rodriguez had back to back walks. Then with 2 outs, Chase Headley doubled to score all three runners on base. After a mound visit, Didi Gregorius singled to right to score Chase Headley and give the Yankees a 4-0 lead.


Chris Davis homered in the second inning but the Orioles couldn't get any more runs across, with 3 straight batters getting out following the home run.


Jacoby Ellsbury answered in the bottom of the inning with his own solo home run, but the Yankees also couldn't get any more across this inning. The score was 5-1.


Didi Gregorius and John Ryan Murphy had back to back singles with one out in the 3rd. Then Stephen Drew came up and ripped a double to score Gregorius. After Jimenez made an early exit from the game, Jacoby Ellsbury hit a sacrifice fly to score Murphy from 3rd. The Yankees led 7-1.

Headley led the bottom of the 5th off with a single, then after Gregorius lined out, Murphy followed up with another single. Headley moved to third on a Stephen Drew fly out to right. Jacoby Ellsbury then hit a double to left to score Headley and Murphy making the score 9-1, Yankees.


Nobody scored until the top of the 8th when JJ Hardy got a solo home run off of Tanaka. Girardi left him in the game until Machado hit another home run off of him two batters later. His final line was 7.2 innings, 5 hits, 3 earned runs, 7 strikeouts and no walks. Chris Capuano came in to relieve him. He threw one inning and didn't give up any hits or runs. Branden Pinder came in for the last out of the game to secure a Yankees win 9-3 and a series sweep.


MY TAKES: The Yankees don't seem to be holding anything back at this point of the season now with a 5-1 record since the break. The starting pitching seems to be improving with Ivan Nova back and Masahiro Tanaka finally finding his stuff again. Eovaldi has also had a few good starts lately.

LOOKING FORWARD: The Yankees go on a 10 game road trip now looking to keep their win streak going against the Twins for 3 games. Game one's pitching matchup will be Michael Pineda against former Yankee, Phil Hughes. Game 2 will be CC Sabathia against Tommy Milone. Game 3 will be Nathan Eovaldi against Kyle Gibson. On paper, it should be a pretty easy road trip for the Yankees against the Twins, Rangers, and White Sox, so hopefully the offense stays hot.