By Chad Raines - July 09, 2015
It was a big day for the Yankees, getting Jacoby Ellsbury and Andrew Miller back from the DL, two players that have been crucial to this season’s success. They faced off against the Athletics in game 2 of the series with CC Sabathia on the mound pitching against Scott Kazmir. The Yankees pulled out a win 5-4, almost giving it up at the end. 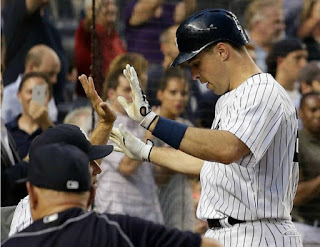 In the top of the second, the A’s were the first to score for the second straight night. Billy Butler led the inning off with a double down the left field line. Then Brett Lawrie, the hero for the A’s last night, singled up the middle moving him to third. Butler was then thrown out trying to take home on a fielder’s choice to Gregorio Petit at third. Josh Phegley came through with a single to score Lawrie. Mark Canha singled to left to put the A’s up 2-0 early.

The Yankees answered with one run in the bottom of the inning when Didi Gregorius doubled to right to score Chris Young who had walked earlier. Gregorius was thrown out trying to take third on the play, The score was 2-1.

Teixeira began his great night with a solo home run in the bottom of the fourth. to tie the game at 2. Chris Young walked again, then John Ryan Murphy singled on a hard hit ground ball to Marcus Semien. Chris Young stole third, and Murphy advanced to second on a wild pitch. Jose Pirela who started at second tonight then hit a sacrifice fly to right scoring Young and giving the Yankees a 3-2 lead.

Sabathia came out of the game after throwing 5.1 innings, allowing 7 hits, 2 earned runs, striking out 1, and walking 2. Bryan Mitchell came in to relieve and got the last two outs of the 6th.
In the bottom of the 6th, Teixeira hit another solo home run to right field, giving him his 22nd home run of the season. This put the Yankees on top 4-2. Justin Wilson shut the A’s down in the 7th. 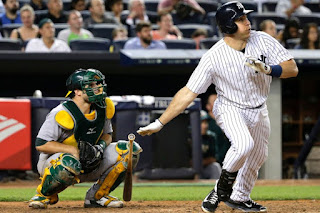 In the 8th inning, Stephen Drew showed some of his sneaky power putting the Yankees on top 5-2 going in to the 9th inning.

After Dellin Betances threw a shutout 8th inning, Andrew Miller came in to close for the 9th. He was a little rusty after not pitching in a Yankee uniform for about a month. Mark Canha single to left with one out, then Marcus Semien hit a 2 run home run to left bringing the A’s back within 1 run. Stephen Vogt then hit a ground ball to Petit, who made a throwing error and the ball bounced into the stands, moving him to second. Petit then made up for that error with a great play to get the last out of the game. Andrew Miller got the save in his first appearance back from the DL, and the Yankees picked up the win 5-4.