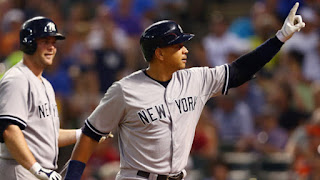 The Yankees opened up a four game series in Arlington on Monday continuing their 10 game road trip. Ivan Nova started on the mound pitching against Matt Harrison. The Yankees looked to stay hot and keep the offense going like it has been.

The first inning was quiet. Both teams went down 1-2-3. The first run came in the bottom of the second when Josh Hamilton singled to left followed by an Elvis Andrus double to score Hamilton making the score 1-0. Leonys Martin singled to score Andrus and make the score 2-0 going into the third.


Chase Headley led the 3rd off with a single immediately followed by Didi Gregorius with a home run tying the game at 2. Brendan Ryan kept it going hitting a triple to left, and Brett Gardner walked. Then Chris Young hit a sacrifice fly to score Ryan and take the lead 3-2.


The Yankees didn't score again until the 6th when Alex Rodriguez gave himself a great birthday present hitting a solo home run and making the game 4-2.


Chasen Shreve came in for Ivan Nova for the 6th. Nova's final line was 5 innings pitched, 5 hits, 2 earned runs, 2 walks, and 3 strikeouts. Shreve shut down the Rangers for the 6th and the 7th striking out 4.


Carlos Beltran walked to lead the 7th of for the Yankees. Then Chase Headley followed with a double and moved him to third. After a pitching change, Didi Gregorius singles to score both Beltran and Headley and make the score 6-2.


Justin Wilson came in for the 8th inning. He has been pitching very well for the past 2 months, and continued, not giving up a hit in an inning of work.


Dellin Betances came in to close the game and walked the leadoff batter before getting three straight outs to end the game. The Yankees win 6-2.