By Chad Raines - July 09, 2015
The Yankees came into the series finale with Oakland after losing game one and winning game two. With Masahiro Tanaka on the mound, the Yankees liked their chances as they came out victorious in the game by a score of 6-2. The Bombers took 2 out of 3 from the Athletics. 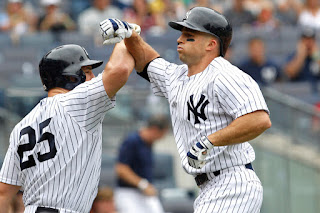 Brett Gardner jumpstarted the Yankee offense smacked the first pitch he saw into the right field seats for his 10th home run of the season. That was all the Yankees offense would get in the first inning, but it was a good boost for his All-Star campaign as well.

The Athletics came roaring back in the second inning getting on the board with a Billy Butler double scoring Josh Reddick. Reddick had gotten on base via an uncharacteristic catcher’s interference call on Brian McCann. Mark Canha would also double off Tanaka in the second inning as Tanaka couldn’t hold the lead very long.

The Yankees tied the game up again in the third on a single from All-Star Mark Teixeira scoring Jacoby Ellsbury. Ellsbury then hit a single plating Stephen Drew and Cole Figueroa to give the Yankees a 4-2 lead in the bottom of the fourth inning.

The Yankees added 2 insurance runs in the eight on a throwing error by Marcus Semien. Chasen Shreve and Adam Warren got the last four outs of the ballgame and the Yankees won a final score of 6-2.