By Chad Raines - August 11, 2015
A free agent hit the market last week that has sent ripples through the baseball world and will have a long lasting effect once he finds a new home. Obviously I’m not talking about a player but rather executive Dave Dombrowski formerly of the Detroit Tigers.

As soon as it was announced that he would be pursuing other ventures almost every team that has been underachieving or is in front office turmoil has been mentioned as a potential destination. The Angels, Blue Jays, Orioles, Mariners and Red Sox are the teams that are immediately in contention for his services. The majority of teams will be interested in hiring Dombrowski as a team president. His departure also has cast the future of Tigers Manager Brad Ausmus in doubt especially after the Jose Iglesias-James McCann scuffle from a few days ago. The changes the Tigers are undergoing has got me thinking about the general manager-manager duo of the Yankees Brian Cashman and Joe Girardi. 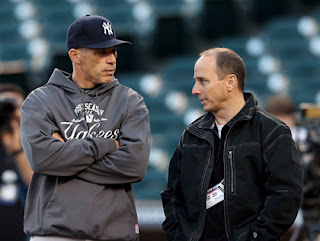 Joe Girardi is signed through 2017 and at this time there are no rumblings is job security is in doubt. He will likely be the manager as long as the team consistently competes. At the time of this writing during his eight years at the helm he has led the records to a 709-535 good for a .570 winning percentage. While in his eight years he has only led the Yankees to one title a look at some defining statistics indicate he is a good manager. In 2013 the Yankees Pythagorean W-L had the Yankees pegged at 79-83. They went 85-77 and were outscored by 21. In 2014 their Pythagorean W-L projected a 77-85 record. They went 84-78 despite being outscored 31. It takes some smart maneuvering to have a winning record with a negative run differential.  His strict adherence to his “binder” has led to a fair share of questionable moves but it easy to be an armchair manager. I don’t believe his lack of championships is a valid reason for replacing him.

Brian Cashman’s misses (i.e. Javier Vasquez, Carl Pavano, Kei Igawa) are more noticeable than his hits (i.e. Nick Swisher, Curtis Granderson, Brandon McCarthy). Cashman has evolved as a general manager during his time moving from a free agent and trade building general manager to the build from the farm system style he currently employs. Cashman is signed through 2017 like Girardi. However I don’t think he should finish this term as general manager. Rather I think this offseason he should receiver the title of president of baseball operations. With Cashman in this role I believe Billy Eppler should become the new general manager. Eppler has interviewed for various general manager openings since 2011. He is well versed in advanced stats, which are of continuing importance as the game of baseball evolves. He also has a strong background in scouting and his work coupled with Damon Oppenheimer has restocked the Yankees farm system into arguably a top 10 system. While I’ve mentioned Oppenheimer I would also give him a title and responsibility bump as well. These moves would help create a powerhouse front office that is becoming more common. The Dodgers and Cubs already implement similar models and the Athletics are rumored to transition in the offseason. Rearranging the front office will also allow the Yankees to stay ahead of the curve with advanced statistics by creating openings within the departments. Having a front office that embraces the evolving use of advanced statistics in free agency and scouting will help the Yankees continue to win.