A Must Win Series in Mid-August 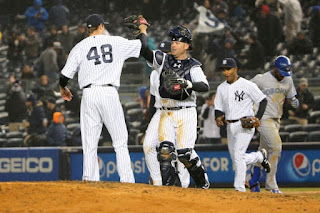 It probably goes without saying, but this weekend series in Toronto is big, very big. I probably don’t need to tell you that this is the biggest series of the season but I’ll say it anyways, because I love you. Sitting just half a game back, this is a great opportunity for the Yankees to get back to their winning ways, smother a scorching hot Blue Jays team, and retake the lead in the AL East.

Unfortunately, the Yankees didn’t get a great draw as they will be going up against David Price in game one and Marco Estrada in game two. Last weekend, the duo threw a combined 13.1 innings allowing just 3 hits, 6 walks and 13 strikeouts all without allowing a run. Might the Yankees get back to familiar territory and batter Price around as they’ve done frequently in the past? Now, more than ever, would be the best time to do it!

On the flipside, the Yankees will be throwing their best three starters in their current rotation with Ivan Nova going in game one. Nova has been solid and if he can command his pitches and cut down on walks, game one will be a great opportunity to steal a win if the offense comes to play.

Although it is to be determined in game two, Masahiro Tanaka should get the nod assuming Joe Girardi sticks with the current rotation. Tanaka took a loss at the hands of Estrada and the Blue Jays on Sunday which should give Tanaka the motivation to go out and shut down the Jays stellar offense in game two of the series. I must add the game two falls on my birthday (August 15) so more than ever, I’m expecting the Yankees to look alive and ready on the field for my sake, of course.

Game three is one that on paper, the Yankees should win. The starter for the Yankees is to be determined but I would expect Luis Severino to make his third career start in what will probably be his biggest start of his career to date. Severino will square off against Drew Hutchison who is 11-2 with a dismal 5.26 ERA. The great win/loss record is greatly due to the large run support Hutchison gets in nearly every start. The hope is that the youngster Severino can continue silencing the Blue Jays bats and allow the Yankees to take the final game of the series which will likely be the rubber match.

The Yankees will look to take 2 of 3 games from Toronto north of the border in the Six and retake sole possession of first place in the AL East. It’s a great opportunity for the team to jump ahead and run with the lead and stack up a sizable lead in the series’ to follow. I’m expecting to see a lot of intensity and heart from the Bombers as they should be playing their best ball this weekend.