By Chad Raines - August 19, 2015
The Yankees won last night in walk-off fashion in an 8-7 win (F/10) and continued to build on their lead in the American League East to make it one full game. On Tuesday, the Yankees sent CC Sabathia (4-9, 5.23 ERA) to the hill to face Minnesota’s Mike Pelfrey (6-7, 3.70 ERA). In his last start, Sabathia allowed nine hits and two earned runs in a six-inning outing at Cleveland. Since becoming a Yankee, Sabathia has a 5-1 record against the Twins with a 3.23 ERA. Mike Pelfrey has been pitching well in August to a 2.41 ERA in 18.2 innings and he has only given up 17 hits and five earned runs. 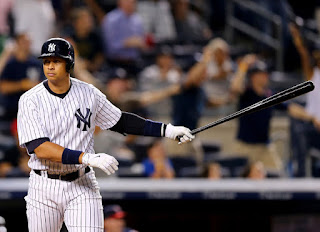 1st Inning
CC Sabathia struck out Brian Dozier on his way to a 1-2-3 top of the first. Brett Gardner had a bunt single in the bottom half but Mike Pelfrey worked his way around that to retire the Yankees without an issue.
2nd Inning
Sabathia set the Twins down in order. In the bottom half of the second, Didi Gregorius was hit by a pitch but nothing happened in terms of offense. The game was scoreless after two innings.
3rd Inning
Sabathia had a perfect game through three innings as he set down the Twins 1-2-3. In the bottom half, Jacoby Ellsbury doubled down the line with one out. With two outs, Alex Rodriguez lined out to shortstop; his struggles at the plate continue even though it was a well-hit baseball.
4th Inning
CC Sabathia continued his dominance with the help of great fielding by Didi Gregorius at shortstop and Brendan Ryan at third base. Twelve up, twelve down as Sabathia remained perfect through four innings. In the Yankee half of the 4th, Carlos Beltran continued his hot streak as he hit a ground rule double to left with one out. Greg Bird’s RBI single - his first career RBI - put the Yankees up 1-0 after four innings.
5th Inning
Sabathia walked Trevor Plouffe with one out so the perfect game was over after 4.1 innings. The no-hitter effort was over after 4.2 innings as Eduardo Escobar singled to shallow right. The game was tied at 1 after five innings as Kurt Suzuki hit an RBI double down the left field line. Plouffe scored easily from third but a solid relay throw by Gregorius led to McCann’s tag on Escobar before he touched home plate and he was out. The Yankees went down in order in the bottom of the fifth inning.
6th Inning
A walk to lead off the inning was erased by a deft 3-6-3 double play started by Bird that allowed Sabathia to complete the 6th inning without issue. Brian McCann and Beltran walked and singled, respectively, to put runners on first and second with one out. Ryan O’Rourke came in for Pelfrey and struck out Bird and got Gregorius to fly out. No harm done as the game was tied at 1 after six innings.
7th Inning
Miguel Sano homered with Joe Mauer on first from a leadoff walk and the Twins took a 3-1 lead. Sabathia exited the game after 103 pitches and because he gave up back to back singles with two outs to Suzuki and Escobar. Nick Rumbelow entered but gave up a single to Shane Robinson and the Twins extended their lead to 4-1 after the top of the 7th. In the bottom of the 7th, the Yankees loaded the bases with two walks and a single. JR Graham came in for O’Rourke and A-Rod came up. On the 1-0 pitch, he delivered by drilling Graham’s pitch OVER THE CENTER FIELD FOR A GRAND SLAM to give the Yankees the 5-4 lead after seven innings! What a turn of events and a clutch time to end his slump.
8th Inning
Justin Wilson relieved Rumbelow and retired Dozier and Mauer quickly. Since Wilson pitched yesterday, Andrew Miller entered with two outs in the eighth inning. Miller struck out Miguel Sano to end the Twins half of the 8th. After Bird and Gregorius led off with two consecutive singles, Chase Headley doubled down the right field line to score both Bird and Gregorius. The Yankees led 7-4 at this point. Brendan Ryan bunted Headley to third. The next batter, Ellsbury, singled home Headley to make it a 8-4 game. AJ Achter relieved Graham and retired Gardner and A-Rod without issue.
9th Inning
Andrew Miller worked around an Eduardo Escobar double with two out to pitch a scoreless ninth inning and the Yankees won 8-4.