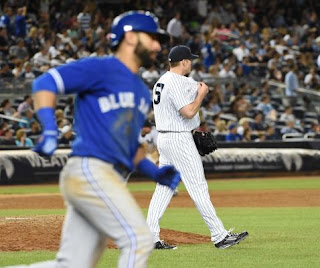 The Yankees came off a 3-game set against the Red Sox where they took two out of three games. The Blue Jays, having acquired Troy Tulowitzki and David Price at the trade deadline, are red hot, winning 5 in a row, including having swept the Minnesota Twins in its last series. The Blue Jays sent knuckleballer and the 2012 Cy Young Award winner R.A. Dickey (6-10, 4.06 ERA) to counter New York’s Nathan Eovaldi (11-2, 4.30 ERA). Dickey has won his last three outings and hasn’t allowed an earned run in 21 innings (spanning over two and a half games). Eovaldi is coming in hot as well; he’s allowed less than 3 runs in 12 of his last 13 starts. With the Blue Jays red hot and only 4.5 games back in the AL East, this is an important series. The Blue Jays won 2-1 in 10 innings.

1st Inning
Josh Donaldson helped the Blue Jays take the 1-0 lead as he reached out and poked Eovaldi’s 2-2 fastball just over the right field wall for his 30th home run of the year. Jose Bautista walked and Edwin Encarnacion doubled to left to set up runners on second and third with one out. However, Eovaldi got out of the inning by getting Justin Smoak to fly out and ex-Yankee Russell Martin to ground out. R.A. Dickey set the Yankees down in order.

2nd Inning
Eovaldi recovered and used 8 pitches to set down the Blue Jays in order. In the bottom half, Mark Teixeira hit a towering shot to left…after an umpire review, it was ruled a home run! This was Mark Teixeira’s 30th Tex(t) message of the year! The game was tied 1-1. With two out, Headley and Gregorius hit consecutive singles and then both moved up a base on a wild pitch. However, Stephen Drew flied out and the Yankees didn’t score any more runs.

3rd Inning
Eovaldi walked Donaldson with one out but got out of the inning by getting Bautista to ground into a 6-4-3 double play. In the bottom half, A-Rod and Teixeira reached via a walk and a single, respectively, and had runners on 1st and 2nd with 2 out. Dickey eliminated the threat by getting McCann to ground out to first. The Yankees and Blue Jays were tied at 1 after three innings.

4th Inning
Russell Martin singled with two outs but Didi Gregorius helped Eovaldi out by grabbing Ryan Goins’s sharp grounder to short and the top of the 4th was over. Beltran walked to start the inning but Headley’s shift-assisted 4-5-3 double play and Gregorius’s groundout ended the inning.

5th Inning
Eovaldi struck out Tulowitzki and Donaldson back-to-back and the Blue Jays did not threaten in the fifth. In the bottom half, Gardner singled with two outs but A-Rod popped out on Dickey’s first pitch to him.

6th Inning
Both teams went down in order in the 6th. It was a 1-1 game at the end of six innings.

7th Inning
With one out, Goins and Pillar reached base on a Teixeira fielding error and infield single to Headley. Eovaldi was pulled in favor of Justin Wilson; Wilson came in and struck out Ben Revere. Dellin Betances then relieved Wilson to face Tulowitzki but walked him on four pitches. Josh Donaldson, who has a career .422 batting average with the bases loaded, grounded out so the threat was eliminated. R.A. Dickey completed his 7-inning, 1-run outing by retiring the Yankees and working around a Didi Gregorius single.

8th Inning
Betances stayed in to start the 8th and Bautista led off with a bloop single to center. After Betances struck out Encarnacion swinging and Smoak looking, Bautista stole second. With Bautista on second, Betances got Russell Martin to ground out. Threat over, inning over. LaTroy Hawkins came in for Toronto in the bottom half of the 8th and Gardner singled to start, but A-Rod grounded into a 4-6-3 double play. He struck out Teixeira and the inning was over. Game was tied at 1 entering the 9th inning.

9th Inning
Andrew Miller relieved Betances to start the 9th. Pinch hitter Chris Colabello wasted no time and singled to start the inning. Kevin Pillar then sacrificed to move pinch runner Munenori Kawasaki to second. After a groundout, Troy Tulowitzki came up with Kawasaki on third and two out. Biggest moment of the game so far. However, Tulowitzki lined out to right and the top of the 9th was over. In the bottom of the 9th, Brett Cecil relieved Hawkins. With one out, Beltran singled and Chris Young came in to pinch run. However, Headley grounded into a 5-4-3 double play and the inning was over.

10th Inning
Branden Pinder came in to start the 10th inning. Jose Bautista greeted him with a solo home run to left and Toronto led 2-1 going into the bottom of the 10th. Toronto closer Roberto Osuna came in to try and shut down the Yankees. He set New York in order and the Blue Jays won.