Bird Debuts and Offense Returns in 8-6 Win Over Indians

By Chad Raines - August 14, 2015
The Yankees were looking to end a 5 game skid coming into the series finale with Cleveland. 5 games in which the offense has been almost nonexistent although the pitching has been very good. Greg Bird was called up today to give Mark Teixeira a break and he played 1st base making his debut. Nathan Eovaldi looked to keep his streak of good starts going as he faced off against Trevor Bauer of the Indians. 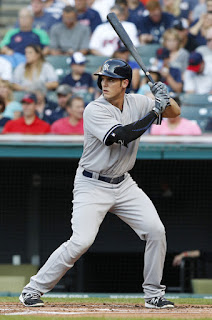 Jacoby Ellsbury singled to lead the game off in the top of the first followed by a Brett Gardner walk. After A-Rod and Carlos Beltran popped out, Brian McCann hit a 3 run home run to give the Yankees an early lead.

In the top of the 2nd inning, Stephen Drew hit his 15th home run of the season to put the Yankees up by 4 runs.

The Indians struck in the bottom of the 3rd inning, scoring 2 runs of their own on a sacrifice fly from Michael Brantley to score Giovanny Urshela and a single from Carlos Santana to score Jose Ramirez. The Yankees were still on top, 4-2.

In the top of the 6th inning, Stephen Drew reached on an error, and Jacoby Ellsbury walked giving Brett Gardner opportunity to single and score Stephen Drew. The Yankees went up 7-2.

Yan Gomes and Abraham Almonte led the bottom of the 6th off with back to back doubles, Gomes scoring on Almonte's. Chris Johnson then grounded out, moving the runner to 3rd which later scored when Lonnie Chisenhall singled. It was 7-4 after 6 innings played.

Francisco Lindor and Carlos Santana singled in the 7th putting runners on first and third when Lindor advanced to third on Santana's hit. Betances threw a wild pitch and Lindor was able to score bringing the Indians back within 2 runs.

Brett Gardner had another RBI single in the top of the 8th, scoring Stephen Drew and adding an insurance run, Stephen Drew's 4th run of the ballgame.

The Indians would score 1 in the bottom of the 9th but it was not enough to overcome the Yankees 8 runs.

Nathan Eovaldi threw 5.1 innings and gave up 7 hits and 4 earned runs. He struck out 4 and he walked 3 in his winning effort moving him to 12-2 on the season. Adam Warren and Justin Wilson threw 0.2 innings, Wilson giving up 1 run. Dellin Betances threw 1.1 innings and shut down the Indians, and Andrew Miller got the save after giving up 2 hits and 1 run in the 9th.

MY TAKES: The first two games of the series were just more of what we saw against Toronto the series before; absolutely horrible offense. Nobody was hitting except for Headley and Gregorius and it didn't really look like anyone even wanted to win those games. I went to the 16 inning game on Tuesday and all I saw was a lack of passion. Nobody wanted to win. The starting pitchers performed well in those games though, but the offense didn't take advantage of it. The third game, the offense finally returned and the Yankees put up 8 runs. The top of the lineup for the most part got out of it's funk it was in and hopefully it stays that way.

LOOKING FORWARD: The Yankees travel to Toronto in a series that is even more important than the one last weekend. They go in trailing the Blue Jays by 0.5 a game in the AL East and look to take 1st place back. The Blue Jays have won 11 games in a row and are very hot offensively and defensively right now as the Yankees look to try to shut them down. Game 1 will have Ivan Nova on the mound facing off against David Price. The Yankees have not yet announce their pitchers for games 2 and 3 by for Toronto it will be Marco Estrada and Drew Hutchison.