By Chad Raines - August 15, 2015
The New York Yankees continued its six-game road trip by making its second stop of the series north of the border in Toronto. The Yankees snapped its five-game losing streak by taking the finale of the series in Cleveland by a score of 8-6. Prior to that, New York had only scored six runs in its five straight losses. The Toronto Blue Jays are very hot. They have an eleven-game winning streak and come off of a sweep of Oakland at home. The Blue Jays led the Yankees by half a game in the American League East heading into Friday’s game and this was an extremely important series for both teams. The Blue Jays sent David Price (11-4, 2.35 ERA) who faced the Yankees just six days earlier, pitching seven scoreless innings and only allowing three hits. The Yankees countered with Ivan Nova (4-4, 3.52 ERA) who allowed four runs in 5.1 innings in that game on August 8. 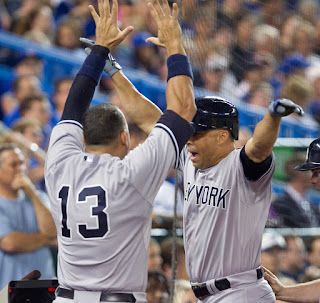 1st Inning
Mark Teixeira continued his struggles as he could not bring Alex Rodriguez home from second with two out. Ivan Nova set the Blue Jays down in order.

2nd Inning
Chase Headley singled with one out but otherwise the Yankees did not threaten. In the bottom half, Nova hit Edwin Encarnacion to start the inning, but Nova recovered to retire the next three Blue Jays in a row, including a nice play by Jacoby Ellsbury on a Ryan Goins fly ball to end the inning.

3rd Inning
Brendan Ryan and Brett Gardner singled to put runners on first and second with one out, but A-Rod lined out and Teixeira struck out looking and the Yankees could not capitalize. Toronto scored first and led 1-0 when Troy Tulowitzki grounded into a fielder’s choice to Nova that scored Kevin Pillar from third. Jose Bautista made it 2-0 with his RBI double to left that scored Tulowitzki. The next batter, Encarnacion, extended the lead to 3-0 with a sacrifice fly that scored Donaldson. Toronto led 3-0 after three innings.

4th Inning
The Yankees went down 1-2-3 in the top of the 4th. In the bottom of half, Nova recovered from giving up three runs in the third to set down the Blue Jays in order.

5th Inning
With two outs, Ellsbury and Gardner hit back to back singles to put men on first and second with two outs for A-Rod. However, A-Rod couldn’t get them home as he flew out to right field to end the inning. In the bottom half, Nova sent Toronto down in order. Toronto led 3-0 after five innings.

6th Inning
Chase Headley doubled with two outs but the Yankees continued their RISP issues as Chris Young grounded out to end the inning. In the bottom half, Encarnacion doubled with one out but Nova retired Smoak and Russell Martin and the threat and inning was over.

7th Inning
Didi Gregorius singled to leadoff the inning but Price retired the next three Yankees in order. Nova walked Ben Revere and allowed Tulowitzki to single with two outs, but got Donaldson to ground out. Toronto led 3-0 after seven innings.

8th Inning
Teixeira and Brian McCann hit back to back singles with one out to put runners on first and second for Chase Headley. Headley then hit a ground rule double to left center and the Yankees got on the board, cutting the deficit to 3-1. David Price’s night was over and in came Aaron Sanchez for the Blue Jays. In response, Joe Girardi sent Carlos Beltran to pinch-hit for Chris Young with one out and men on second and third. After swinging through two straight 97-mph fastballs and then taking a high fastball, Sanchez threw another fastball middle-middle and Beltran swung and THAT BALL WAS GONE! OVER THE WALL IN RIGHT CENTER and the Yankees led 4-3 on Beltran’s 3-run home run! What a clutch hit and his signature Yankee moment of the year! Dellin Betances entered for Nova to start the bottom of the 8th. First, he struck out Jose Bautista on three pitches - wicked curveball, 99-mph fastball, and then a nasty knuckle curve that Bautista flailed at. He then retired Encarnacion on a lazy fly ball to center field. Justin Smoak was next and he put a scare into a Betances fastball, driving it DEEEEP to center field but Ellsbury caught it just before reaching the warning track. The Yankees led 4-3 after eight innings.

9th Inning
Brett Cecil relieved Sanchez to start the 9th and he quickly retired the Yankees in order. Andrew Miller came in for Betances to start the bottom of the 9th. Cliff Pennington walked and then Kevin Pillar singled to put runners on first and second with one out. Then, Miller threw a wild pitch to the next batter, Ben Revere, which moved the runners up to second and third with one out. And Andrew Miller STRUCK OUT REVERE! One more batter - two outs but still second and third. Troy Tulowitzki came to the plate. On the 12th pitch of the at-bat and 4th full count pitch, MILLER STRUCK OUT TULOWITZKI and the Yankees win 4-3!!!! What a game! 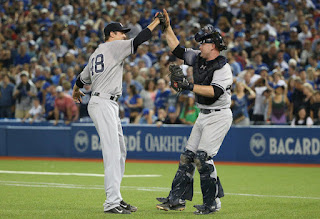