By Chad Raines - August 24, 2015
The Yankees came into this series against Houston trailing the Toronto Blue Jays in the American League East after losing three of four games to the Cleveland Indians. The Yankees took an especially difficult loss on Sunday as Dellin Betances, brilliant as of late, gave up a 8th inning home run to Francisco Lindor and the Indians won 4-3. The Yankees started a 3-game series against Houston today. Scott Feldman (5-5, 4.05 ERA) faces Nathan Eovaldi (13-2, 4.24 ERA). Feldman has allowed three earned runs in his last five consecutive outings and two or less in four of those outings. Eovaldi has not lost since his June 16th disaster at Miami where he gave up eight earned runs in less than one inning. He’s lowered his ERA from 5.12 to 4.24 in the last two months. Today was also Brett Gardner’s 32nd birthday! 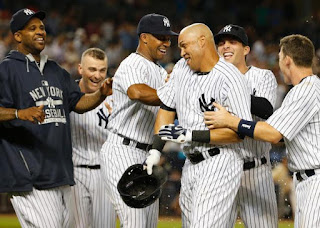 1st Inning
Working around a Carlos Correa single, Nathan Eovaldi struck out three of the four batters in the first. The Yankees went down in order.
2nd Inning
Evan Gattis and Luis Valbuena hit back-to-back singles to put runners on first and second with one out; however, Eovaldi struck out the next two batters (five strikeouts through two) to eliminate the threat. Brian McCann’s leadoff single was wasted as the Yankees did not threaten in this inning.
3rd Inning
Eovaldi retired the Astros in order. In the bottom half, Didi Gregorius and Stephen Drew hit consecutive singles and Ellsbury’s fielder’s choice grounder to first led to men on first and third with one out. However, the birthday boy Gardner struck out and A-Rod flied out and the Yankees failed to score with runners in scoring position. The game was scoreless after three innings.
4th Inning
Eovaldi recorded his sixth strikeout on his way to a 1-2-3 inning. Carlos Beltran’s 6-4-3 double play wasted McCann’s leadoff single and the Yankees did not threaten in the fourth.
5th Inning
Valbuena walked to start the fifth and Jose Altuve walked later with two outs but Eovaldi worked through the inning without issue. The Yankees went down in order.
6th Inning
Correa’s single and Colby Rasmus’s walk put runners on first and second with none out. Carlos Gomez’s sacrifice bunt advanced the runners. However, Correa did not try to run home when Gattis grounded to first, but Rasmus thought Correa would so Rasmus was caught between second and third and was out. Eovaldi escaped the threat without allowing a run when Valbuena lined out to center. In the bottom half, the Yankees went down in order. The game was scoreless after six innings.
7th Inning
Eovaldi retired the Astros in order. McCann’s third single (he was 3-3 up to this point) and Beltran’s line drive single off of the wall in right put runners on the corners with none out. Scott Feldman came up big and struck out Greg Bird for the first out. Chase Headley’s shallow fly ball to center was caught by Gomez and Gomez unleashed a great throw to home and McCann was OUT! A 8-3 double play and the Yankees FAILED to score! The game remained scoreless after seven innings.
8th Inning
With one out, Correa’s grounder to third should have been an easy out but Headley committed his 20TH ERROR with a terrible throw and Correa reached second. Rasmus flied out to left for the second out and Carlos Gomez flied out to center and the inning was over. The Yankees went down in order.
9th Inning
Andrew Miller relieved Eovaldi to start the 9th. Evan Gattis had a leadoff single and Jake Marisnick pinch ran for him. However, Valbuena struck out on a 3-2 count as Marisnick stole second but was caught by McCann. Miller then struck out Chris Carter and the top of the 9th was over. Oliver Perez relieved Feldman. Gardner walked to lead off the 9th and then reached second on a Perez wild pitch. A-Rod was then intentionally walked and then McCann also walked! Bases loaded and none out for Beltran. Oliver Perez out, Chad Qualls in. And on the first pitch, Beltran’s DEEEP fly ball ended the game as Gardner SCORED on the sacrifice fly and the YANKEES WALK-OFF AND WIN 1-0!