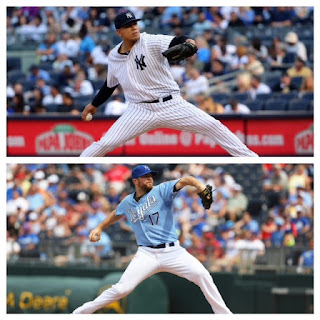 Two of the most dominant relievers and set-up men in the game are Wade Davis and Dellin Betances. Wade Davis was one of the reasons why the Royals made it all the way to Game 7 of the World Series in 2014. He’s also the best reliever on the Royals this year. Dellin Betances has been essential to the Yankees, pitching the most out of the pen and being completely dominant. Using major statistics, I compare Davis and Betances to find out who is truly the more dominant set-up man. All stats were retrieved from ESPN and are accurate as of Sunday, August 2, 2015.

CONCLUSION
It was extremely difficult to pick out who the dominant set-up man is. In situations with a blank slate and no runners on, Betances performs better. However, when runners reach base, Davis does a better job of getting out of the jam. Betances also does better when he gets ahead but Davis does a better job of recovering after falling behind. Betances has allowed 1 hit all year when there are RISP with 2 out while Davis has allowed 2 hits. Betances strikes out more but Davis walks less. If I had both Betances and Davis on the same team, I would send Betances out to start an inning and Davis out when there are runners on. Additionally, when outs are the absolute necessity, I would send out Davis. However, when there is a power hitter such as Mike Trout or Giancarlo Stanton, I’d send out Betances with his 95+ mph fastball and knuckle curve. Both pitchers are extremely dominant and are major assets to each team. Good luck to both as they finish off the year. Go Yankees!