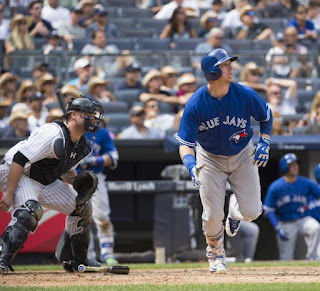 1st Inning
Ivan Nova worked around a Josh Donaldson single to strike out Bautista and Encarnacion to end the inning. David Price set the Yankees down in order.

2nd Inning
Ryan Goins was able to salvage what would’ve been a 1-2-3 inning by reaching on an infield single to Didi Gregorius. Nova got through the inning by getting two groundouts back to himself and a strikeout. In the bottom half, Carlos Beltran walked with two out. Price responded by getting Headley to ground into a fielder’s choice to end the inning.

3rd Inning
Brendan Ryan made a beautiful play on the leadoff grounder by Ben Revere, reaching to his right and simultaneously jumping and throwing to get him at first. Nova struck out Tulowitzki and Donaldson, both swinging, to end the inning. Between the top and bottom of 3rd, Toronto manager John Gibbons was ejected by home plate umpire Greg Gibson for arguing on check swings by Donaldson. In the bottom half, Ellsbury walked with two out but Young grounded out to end the inning. The Yankees had no hits through 3 innings.

4th Inning
Nova set the Blue Jays down in order. A-Rod singled to start the bottom of the 4th and with two out, Beltran set up runners on first and second with his single to center; however, Headley flied out and the fourth was over.

5th Inning
Nova hit Russell Martin to start the inning. Goins tried to bunt but McCann threw to second and Gregorius made a nice play to catch the ball, keep his foot on the bag, and avoid Martin’s slide. Force out at second was the result and no sacrifice bunt. The Yankees went down 1-2-3 in the 5th.

6th Inning
In the 6th, Toronto scored 4 runs on one swing of the bat. After Donaldson, Bautista, and Encarnacion reached base on two walks and a single, Justin Smoak sent Nova’s 0-1 pitch into the right field stands for a grand slam and the Blue Jays went in front for good, 4-0. The Yankees had no response and went down 1-2-3.

7th Inning
Bryan Mitchell relieved Adam Warren, who struck out the last two batters after Smoak hit a grand slam off of Nova. Mitchell allowed a solo home run to Tulowitzki. The Yankees had men on first and third with two out but Brendan Ryan popped out.

8th Inning
Toronto added a 6th run when Russell Martin hit an infield single. The Yankees went down in order.