Deliver Us From Ineptitude 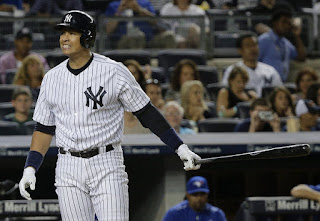 The sweep falls squarely on an anemic offense and two questionable decisions by Joe Girardi. Nathan Eovaldi and Masahiro Tanaka kept the high-powered Blue Jays offense in check. Ivan Nova did the same until he was left in to pitch in the 6th despite an elevated pitch count. The other questionable decision Girardi made was to have Brandon Pinder start the 10th inning of Friday’s game despite Andrew Miller coming off a 9-pitch inning and Chasen Shreve available out of the bullpen. These decisions are easy to judge in hindsight and while Girardi may one day have to answer for decisions that blew crucial games for seasons past, present and future it is a better exercise to discuss what the Yankees can do right now to help the playoff push.

Despite early concerns eight of the nine batters have established their place in the lineup. The missing batter is second base where Stephen Drew has been a black hole as the primary starter. I’ve already spoken extensively on how to utilize Stephen Drew in this article but I’ll reiterate it, the time has come to let Rob Refsnyder take over the reigns at second base. At this point the lone batting stat that can be argued as a positive contribution is his 13 home runs. For 139 games we have seen Stephen Drew hit .170/.248/.345 with a -0.6 WAR. These stats aren’t aberrations.

August trade targets that have been bantered around include Martin Prado and Chase Utley. I’ll be brief and blunt in my thoughts on these players. Fans have become enamored with the 2 months Prado spent in pinstripes last year and greatly over value his versatility. He’s a nice player but he is not a savior. As for Chase Utley he has been WORSE than Drew this year. He’s older (36 turning 37) and has been hurt most of the year having only played in 67 games as of this writing. He hasn’t produced when he has played with averages of .185/.260/.286. Don’t fall in the trap believing his past success and veteran status can help the Yankees reach and succeed in the postseason. The Phillies benched Utley. That fact should be more convincing than any stats I throw at you benched him.

I agree with the Yankees decision to stand pat at the deadline. In my opinion the prospect cost for stars to slight upgrades was too high. However if the team is going to hold on prospects they need to let them contribute. Refsnyder has nothing left to prove at Triple-A offensively and if defense is a concern handcuff him with Ryan or Drew. The Yankees are wasting and opportunity to get Refsnyder ready for a playoff push when his offense will be needed the most.