Houston, We May Have a Problem

By Chad Raines - August 24, 2015
Something about the Cleveland Indians just gets in the Yankees head. The Bronx Bombers dropped three of four from the Tribe at the stadium this weekend and five of seven overall against Cleveland. A team like the Indians shouldn’t even be mentioned in the same breath as the Yankees and that is what makes these losses so frustrating. Whether it be Didi Gregorius failure to move runners home who are in scoring position, Stephen Drew’s ineptitude with a bat or Dellin Betances not being able to contain Francisco Lindor. Any way you slice it this was a bad weekend for the Yankees. Oh and lets not forget the surging Toronto Blue Jays who are now in sole possession of first place after their victory against the Angels yesterday. To make matters worse the red hot Houston Astros have come to town this weekend (now the title makes sense right?). 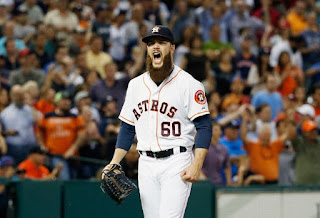 Game two already seems like a tough matchup with Houston star lefty Dallas Keuchel on the mound. The Astros lineup will love to take advantage of Yankee Stadium’s friendly short porch and generous jet stream. Houston will give the Yanks nightmares with power hitters Evan Gattis, Carlos Gomez, Chris Carter and of course one of the best pure hitters in the game Jose Altuve. The Yankees will try to tame these hot bats by sending out Ivan Nova and Wednesday the return of Michael Pineda to the rotation in games two and three.

New York could desperately use Pineda back in the rotation as he has been one of their best pitcher this season. In correlation to that CC Sabathia was removed from yesterdays spot after suffering a knee injury. Although as harsh as this sounds that might be better for the Yankees in the long run. Young rookie Luis Severino has looked very impressive in his short big league career. All of these guys are going to need to step it up for the Yankees to regain control of first place. And for the love of God Joe can we please get Adam Warren back in the rotation.

Watching the Yankees this year has been a taxing experiment for sure but Girardi has made it unwatchable at times. He’s made countless mistakes in crucial situations that have cost the team wins. Sure the Yankees are in the playoff hunt and they very well could still win the AL East but things aren’t looking easy. Mark Teixeira has been hurt, Brett Gardner and Jacoby Ellsbury refuse to steal bases which is just mind boggling. Stephen Drew can’t hit and Didi looks lost at the plate. One of the bright spots over the past few weeks has been Carlos Beltran who has been about as clutch as anyone can be as of late. I’d hate to think where this team would be without him. These three games against Houston will be tough but the schedule doesn’t get much easier. The Yankees still have seven games against first place Toronto which is a great opportunity to make up games but could also be terrifying if the Blue Jays offense continues their scorching pace. New York also will also face division rivals Boston, Baltimore and Tampa Bay over the next month. While the Yankees are better than all three teams they have to play better because those three teams would love nothing more than to play spoiler to the Yankees.

The overwhelming tone of this article is certainly one of negativity. That’s not to take anything away from what the Yankees have done this year, but the Yankees don’t settle for being above expectations, they want to win all the time. Right now this team seriously lacks that killer instinct that championship team have. They can turn things around tonight but if they don’t…well Houston we have a problem.