By Chad Raines - August 24, 2015
After dialing up his fastball to 91 MPH, and striking out Yan Gomes in the third inning of Sunday’s contest against the Indians, CC Sabathia appeared to be injured. Without even attempting to stay in the game, he walked off the mound for what may turn out to be the last time of the 2015 season. I’ll admit that I began praying this injury had something to do with his shoulder. Under the terms of his contract, if Sabathia suffers a shoulder injury, his $25 million option for 2017 will not vest. I love Sabathia as a player due to his competitive nature, but for most of this season he has been a liability to his team. I view this injury to CC as a huge plus to the team moving forward. Now, as opposed to almost expecting an automatic loss every time he took the mound, we can actually have a pitcher who keeps us in the game. His big game experience will surely be missed, however he can continue to be one of the team’s leaders from the bench, where he actually can be an asset. 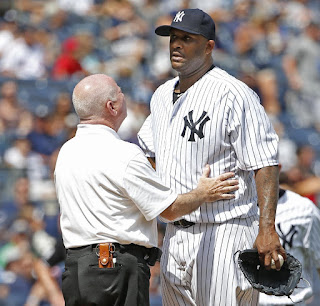 Before I make my points, I would first like to express my appreciation for everything CC Sabathia has done for this franchise. From 2009-2012, Sabathia was a true ace, and came up huge in so many big games. He was an integral part of the 2009 championship puzzle, and a major contributor to three subsequent playoff runs. That being said, it is currently 2015 and the past is just that, the past. I truly hope I will not see CC Sabathia in a Yankee uniform again until Old Timers Day 2020. Despite pitching better of late, he is 4-9 with a 5.27 ERA on the season. He has been, by far, our worst starting pitcher. I was at a loss for words when Joe Girardi moved Adam Warren, who up to that point in the season had been our most consistent starting pitcher, to the bullpen when Ivan Nova came back from his Tommy John rehab. It’s sad to say, but the only reason the Yankees continued to allow CC to start games was his $23 million salary. With Michael Pineda due back from the disabled list this Wednesday, he should supplant CC in the rotation very nicely.

Joe Girardi had planned on moving to a six-man rotation, so this injury to Sabathia puts that plan in jeopardy. Bryan Mitchell has been rehabbing since being hit in the face with a line drive last week against the Twins, and his due back soon, so I wouldn’t be surprised if Girardi decided to insert him in the rotation. I think Mitchell’s power arm best serves this team in the bullpen though. Despite having success out of the bullpen, Adam Warren would be the best option for the rotation. This season Warren is 6-5 with a 3.16 ERA, and has given up only 89 hits through 108.1 innings. Warren seemed to be putting it together as a starter around when he was removed from the rotation in favor of Nova and Sabathia. Warren’s pitch arsenal, along with his composure on the mound, are two of the many reasons he best serves this team as a starting pitcher. Unfortunately, I believe Girardi will opt for the former, rather than the ladder. I’m not taking anything away from Bryan Mitchell, because he is obviously an improvement over Sabathia, however I believe Warren would be the wiser choice.

After discovering that Sabathia’s injury was to his knee, I became very disappointed. As I noted earlier, an injury to Sabathia’s shoulder would have took the Yankees off the hook for the 2017 season as far as Sabathia’s contract goes. Sabathia believes the reason he had been better his last three starts, in which he lasted at least six innings in each, was because he had dialed it up instead of holding back, as he had been during his previous starts. According to Sabathia, “It is super frustrating because it is still in there. The last couple of starts, you guys have seen. It is just frustrating I can’t do it every time.” I agree with the big guy, but only to a certain extent. I truly feel bad for Sabathia because the last couple of years have clearly been very difficult for him. Making the transition from a power guy at the top of the rotation to pitching with diminished stuff has not been as easy of a task for CC as it was for guys like Mike Mussina, or his good friend Andy Pettitte.

I’ve thought about this a lot this season and I’ve come to the conclusion that the smartest move for CC Sabathia would be opting for retirement. The knee he injured on Sunday is the same one he had already gotten drained twice this season. This persistent injury concern, in conjunction with the amount of innings on his arm, has made CC an ineffective pitcher. Even though he can pitch halfway decent occasionally, he cannot do so without having a significant injury concern. He is not good enough at this point in his career for the Yankees to continue taking risks on him when there are better options available to be starting games for the team. Both Adam Warren and Bryan Mitchell provide upgrades over a 2015 CC Sabathia. With Masahiro Tanaka, Luis Severino, Michael Pineda, Nathan Eovaldi, and Ivan Nova the Yankees suddenly have a formidable five-man rotation. If they do chose to go with a six-man rotation, I just hope to God they don’t allow Chris Capuano to start another game…

As I’ve said, CC Sabathia has been a great Yankee, and I hope he is remembered for his early successes with the team. Unfortunately, as those times grow more distant in the past, fans are getting very aggravated with Sabathia due to his struggles. His latest injury really could serve as a blessing in disguise for this team. I haven’t a clue whether or not the Yankees will stick to their plan of moving to a six man rotation, but I do know that regardless of whether it is a five or six man rotation, the Yankees are better off without CC Sabathia as a member of it. For the rest of the season, I hope CC hangs around and continues to be a great teammate, while working with the younger pitchers because despite his diminished ability there is no doubt that he still has a lot to offer in terms of experience and wisdom. This winter CC has a decision to make, and I hope for the sake of the team he makes the right one. He would be a fool to leave $50 million on the table, so the Yankees must work out a buy out of some sorts with him. If the Yankees count on him for 2016, as they have this year, they will be wasting a valuable rotation spot, and lose many games as a result.