I Hate To Say I Told You So… 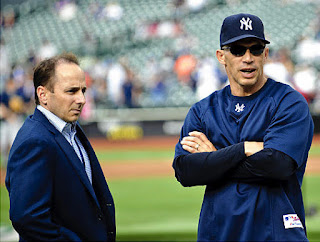 After this year’s July 31st non-waiver trade deadline passed, I was very frustrated and disappointed with Brian Cashman. While all our rivals in the American League improved their teams, with the Blue Jays making the most drastic moves, the Yankees stood pat and did nothing. They did get Dustin Ackley from Seattle, however his injury prompted them to resign Garrett Jones, the player who was designated for assignment to make room for Ackley on the roster, ironically enough. Over the last two weeks the Yankees have witnessed their once seemingly insurmountable lead evaporate from 7 to 1.5 games. The Blue Jays came to town this weekend for a huge series in the Bronx, and the Yankees offense has been anemic. Having only scored 1 run in three games, the Bombers lost 2-1 in extra innings against Toronto on Friday, got blown out 6-0 on Saturday, and lost a pathetic 2-0 game on Sunday with yours truly in attendance. I’m not saying the season is over, however many Yankees fans who were content with standing pat at the deadline should be rethinking their positions. Brian Cashman and Joe Girardi may have cost this team a legitimate shot at winning a championship, and here is why. DISCLAIMER: Please read the entire article before offering criticisms.

There were only two acquisitions that I wanted Brian Cashman to make. I wanted Martin Prado as the every day second baseman, and David Price to anchor the rotation. These two moves would have helped sure up our two glaring weaknesses. Isn’t it ironic that David Price completely dominated this inconsistent Yankees offense that our general manager was so confident in this Saturday? Since coming to the Blue Jays, David Price is proving exactly why the Yankees should have traded for him. On Saturday, he struck out seven Yankees, while pitching a seven hit shut out. Price is the epitome of consistency, and the Yankees do not have a consistent starting pitcher. It would have been a perfect match, right? Albeit, our starters have been better of late with Nathan Eovaldi and Ivan Nova putting up good outings, CC Sabathia rediscovering some fire against the Red Sox, and Masahiro Tanaka beginning to give some distance. Luis Severino, despite the mammoth blast he gave up to David Ortiz, was also very impressive in his MLB Debut. What angers me the most though is Brian Cashman knew Michael Pineda was injured, and still didn’t go all out for Price.

As I’ve said ad nauseam in many of my recent articles, this Yankees rotation wont last a day come October, and now due to the combination of our struggles and the Blue Jays recent successes, I’m nervous about them even getting there. Of course as fans we want to keep all of our prospects, but at what price? When your team has a legitimate shot at winning a championship you have to go for it. The Yankees failed to improve their deeply flawed team, and are beginning to feel the consequences.

Over the last couple of weeks I have heard many fans rebut me by arguing something along of the lines of, “You can’t mortgage the future for the present.” My response to that argument is quite simple actually. Worry about tomorrow, tomorrow, and worry about today, today. Having stud prospects is quite refreshing, but Brian Cashman’s refusal to part with any of them for proven talent should anger just about any Yankees fan. I haven’t felt this way about a Yankees team in a very long time, and I feel they are very close to championship caliber, however I’m becoming more pessimistic by the day.

I’d also like to take some time to address second base. I ask this question with all sincerity, WHY IN THE WORLD IS STEPHEN DREW STILL A YANKEE? Stephen Drew epitomizes uselessness. Just when he raised his average to .199, and we thought he would break the Mendoza Line, reality set in and he showed us what we all had previously known: he is not a good baseball player. Martin Prado, who was great when the Yankees acquired him at last years trade deadline, would have been a tremendous fit.

Even now, I would rather see Brendan Ryan over Stephen Drew. Ryan is a superior defender, and plays with heart. He also gets far more hits than Drew on a consistent basis. Yes, we all know Drew has 13 Home Runs, but simply ignoring the rest of his horrendous offensive statistics is unfair. I can’t believe the Yankees keep running out Stephen Drew at second base. He is an automatic out, and a disgrace to the Yankee brand. I’d really like to see Rob Refsnyder given a shot, but we all know that’s a pipe dream.

Now, I have to discuss Joe Girardi, our manager. Joe Girardi has done many things this year that have made me both scratch my head, and question his competence as a major league manager. For the record, I’ve been in favor of firing Girardi since the conclusion of the 2012 season, so my take may be a little biased. After learning of Girardi’s bullpen decision-making on Friday night, I almost went ballistic. In the bottom of the tenth inning of what was the Yankees biggest game thus far in the season, with the Blue Jays 2-4 hitters coming up, there was no logical reason for Joe Girardi to use his least experienced reliever, but so and behold that is exactly what he did. Although almost every individual with a brain could have predicted it, except Joe Girardi, Jose Bautista went deep off of Pinder and won the game for the Blue Jays. I don’t know if Joe realizes this, but that game was not the time to be messing around with his bullpen matchups.

This is just the latest in what has been a horrible season of managing for Girardi. The anemic offense of the last couple of games is also to blame, but that loss falls flat on the shoulders of Girardi. When he could have either kept his closer Andrew Miller, who threw only six pitches in the ninth inning, or brought in Chasen Shreve, Girardi chose to go to the reliever lowest on his depth chart. My mind is still reeling from his horrendous decision-making. Girardi’s management of the bullpen has been mind-boggling this season, to say the least. Girardi also likes to give players in the middle of hot streaks a day off. I was livid when Alex Rodriguez, following his three home run performance in Minnesota, was given the next day off, but that’s a discussion for another day.

I’m very disappointed in both our general manager and manager. Riding high on a seven game division lead as the month of August began, I was optimistic as ever, but recently said optimism has been evaporating, almost as fast as the Yankees division lead. Is the sky falling? No, but it’s pretty close. Yes, this recent sweep by the Blue Jays took place in early August, and there is plenty of baseball left to play, however right now they look like the superior team. They look like the superior team because of the acquisitions their general manager made at the trade deadline. The Yankees look like the inferior team because of the flaws they failed to address at the deadline are being exposed. Cashman’s adamant refusal to give up any prospects, and Joe Girardi’s incompetence may have cost this team a chance at a championship.

I hope I’m wrong, but unless something changes, the Blue Jays, who are clicking on all cylinders, will overtake us very soon. This Toronto team, having not made the playoffs since 1993, is hungry and has something to prove, while the Yankees seem to have grown complacent.