By Chad Raines - August 09, 2015
In the New York Yankees biggest series of the season, Yankee manager Joe Girardi needed to be better as the Yankees were swept by the Jays, and shut out in the final two games. The Yankees came into the series with Toronto in first place, 4.5 games up on the Jays in the American League East and had 90 runs scored in their previous 10 games. The Blue Jays on the other hand were 9-1 with newly acquired shortstop Troy Tulowitzki in the lineup and also added ace David Price at the July 31st Trade Deadline.

Throughout the series, Girardi made multiple mistakes and they proved to be crucial. 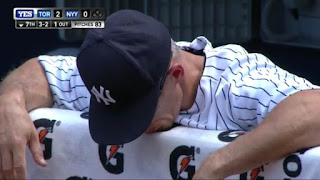 On Friday night, with the Yankees and Blue Jays tied at 1 in the 10th Girardi inexplicably opted to go with right hander Branden Pinder, who has been up and down from Triple A to the Majors and back all year.

The inexperienced right hander was called upon to face Josh Donaldson, who has 31 home runs, Jose Bautista who is one of the best home run hitters on the planet and Edwin Encarnacion, a veteran with power.

Well you can pretty much predict what happens next. Pinder missed his spot by a foot on a 1-2 pitch to Bautista, and the Jays slugger hits it into the left field seats. The Jays would hang on and win the game in 10, and the Yankees wasted a fantastic outing by starter Nathan Evoldi who allowed one run, a Donaldson homer over 6 1/3 innings.

Watching the game was not only irritating, but hard to believe. Of all the players in the Blue Jays lineup, the two, three, and four batters are the ones that Pinder had to face. Instead of bringing in Chasen Shreve, who is 6-1 with a 2.31 earned run average, Girardi brings in an inexperienced rookie to face the hottest hitters in the American League. I just don’t get it.

On Saturday, the Yankees and Jays were tied at zero in the top of the sixth. Yankees starter Ivan Nova took the mound in the sixth and loaded the bases with one man out. Nova had thrown 103 pitches up until this point and Girardi had Adam Warren ready in the bullpen. Girardi elected to stay with Nova for one more batter. Justin Smoak stepped into the left handed batter’s box and crushed an 81 mile-per- hour curveball into the seats in right field for a grand slam as Warren watched from the bullpen.

A move should’ve been made and Girardi should be kicking himself, but again Nova is a ground ball pitcher and a double play could’ve ended the inning. Either way you look at it Girardi left him in one batter too long and the Jays took advantage.

The last order of business I had a problem with this series, and basically all year is Stephen Drew. The Yankees organization NEEDS to do something about their second baseman. Drew is terrible. It’s simple. It is August and he is hitting .194. ENOUGH IS ENOUGH. The Yankees need to sit him, bring Rob Refsnyder back up and see what he can do. With newly acquired Dustin Ackley on the disable list, it is time for Drew to go.

Girardi allowing him to play in this series mind boggles me. The guy cannot hit, and in Sunday’s 2-0 loss and second consecutive shutout Drew came to bat in the seventh with two on and two out. He swung at a fastball four feet over his head and ended the inning and threat. He should not be hitting in that spot. I put that on Girardi. You have Garret Jones, John Ryan Murphy and even Brendan Ryan. Drew needs to go. He shouldn’t be playing every day.

At the end of the day and a pitiful series, the Yankees still sit in first, have surprised everyone and in my mind are still the team to beat in the AL East. The series was important but the Yankees caught a good team at the wrong time. It is not the end of the world as the Yankees and Jays still play 12 more times.

For a team with a lot of question marks coming in, the Yankees are still right there and in the words of Girardi, “There is a long way to go.”