By NYY v BOS - August 05, 2015
Every team's fans like to razz their skipper. It's part of the game. If something goes wrong, there's always the potential for the manager to become a scapegoat that night. Is this deserved? I would say most of the time it's not, but sometimes managers do things that can't be explain. No shred or inkling of knowledge can be found in them. Joe Girardi had one of those moments last night.

In the seventh inning last night lefty reliever Justin Wilson was brought in to face the bottom of the Red Sox order. After three batters there were two outs and a runner on first. Wilson was then left to face a ridiculously bad Jackie Bradley Jr. who was hitting only .109 on the year - you know, the kind of guy a power arm like Justin Wilson should destroy.

Well, Wilson quickly got two strikes in the at-bat before throwing one in the dirt that allowed Rusney Castillo to advance from first two second. That's when Joe Girardi lost his mind. 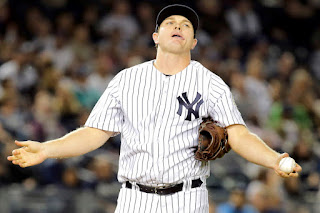 With two outs and two strikes on a lefty hitting .109, Joe Girardi opted to bring in his right handed set up man Dellin Betances - mid at-bat.

Dellin then proceeded to throw three straight balls, one of which in the dirt which moved the runner to third, to walk the .109 hitting 9th hitter.

This brought up .280 hitting lefty Brock Holt. Betances managed to send him back to the dugout on strikes but the means by which that third out was recorded was beyond questionable.

In other words, Wilson has been an astounding reliever and the decision to pull him mid at-bat when he had a two strike count was ludicrous.

Especially when Betances could've and in all honesty, should've given the lead away.

Betances has been an incredible reliever all year long, there's no doubt about that. However, he's had very real control issues at times this year and last night was one of them.

Upon entry to the game, he threw three straight balls to .109 hitting 9th hitter (can't emphasize this enough) Jackie Bradley Jr. to put him on base.

Can you really blame him though? Dellin was brought in at a very awkward and uncomfortable time being half way through an at-bat. Being brought in to throw breaking balls right out of the gate isn't an easy task.

And it continued to show as Betances struggled through the Holt at bat eventually ending up 2-2 in the count against the Sox ASG representative. What Betances did was strike Holt out, but what should've happened is different.

Betances balked. Balk rules are funny, but essentially Betances balked one way or another. From one perspective it can be said he did not come set or from another it can be said he came set then lifted his his front leg without throwing home or to a base. He and Joe Girardi are incredibly lucky the umpire missed such a clear one.

This really isn't a knock on Betances as much as it is Girardi. Joe's decision should've blown the lead for the Yankees and we can't ignore that just because he got away with it.

Girardi has to have all those numbers on Wilson that we have - it's legendary how he keeps a binder full of in depth statistics - and to make such poor decision with such resources at your disposal is inexcusable. Even without those numbers it's a pretty common sense move to let such a good lefty pitcher finish off such a poor lefty hitter.

That run scoring would've changed the whole game. With a tie ball game it's highly unlikely Craig Breslow would've been brought in and allow so many runs to score (this via our Boston insider @mcote31).

Not to mention if the Yankees hadn't scored all those runs, the team would've had to figure out what to do for the eight inning. Running a clearly off and already overworked Betances out there against Bogarts, Ortiz, and Ramirez doesn't seem like it would've been flawless.

Not only is Joe jeopardizing games as they happen, but he's also putting future games in jeopardy by routinely bringing in Betances so early and overworking him. There may be times when circumstances call for that, but last night circumstances called for Wilson to stay in.

I would also be feeling pretty peeved if I were Wilson. How would you feel if you got yanked mid at-bat with two strikes against one of the worst hitters in the league? Then to see the guy who took over for you walk that hitter? If you say anything other than angry, you're lying.

Joe Girardi has pulled wins out of the teams in years past and has been a very good manager this year, but that doesn't excuse this kind of garbage. This is baseball common sense being ignored and coming from the manager of the most prestigious sports franchise in all the world it's absolutely unacceptable.

Last night's stunt could've and should've blown that lead. It's easy to get lost in the fallacy of hindsight and say "we would've won anyways," but you have to think more critically and analytically and realize it's not as simple as that.

Joe's made a few head scatchers this year and you have to wonder how he would stay with the team if the team were to, God forbid, miss the playoffs.

When asked what in the world he did what he did last night, MLB.com's Bryan Hoch reports that Girardi offered no explanation and simply said "strategy."