By Chad Raines - August 02, 2015
Last night, the Yankees sent RHP Bryan Mitchell (0-0, 2.89 ERA) to the mound, who has split time between Triple-A Scranton/Wilkes-Barre and the Bronx. He is temporarily taking over the spot vacated by Michael Pineda, who went on the disabled list earlier this week. The White Sox countered with LHP John Danks (5-8, 4.97 ERA); in his last 5 starts, he’s either allowed no runs (three times) or 6 earned runs (twice). The White Sox turned on its offense today and won 8-2. 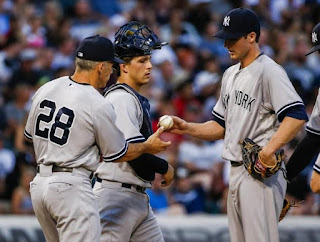 Game 2 (Saturday, August 1) - Yankees 2 @ White Sox 8
GAME SUMMARY
1st Inning
John Danks set the Yankees down 1-2-3. In the bottom half, Jose Abreu’s double scored Adam Eaton and Chicago led 1-0 after 1.
2nd Inning
John Danks set the Yankees down again in order and had 4 strikeouts through 2 innings. In the botto half, Alexei Ramirez homered to left to double the White Sox lead to 2-0.
3rd Inning
After John Ryan Murphy doubled and Brendan Ryan singled to put runners on the corners with none out, Didi Gregorius drilled a deep fly ball to right. It looked like it would be a 3-run home run but Avisail Garcia saved 3 runs by robbing Gregorius. He jumped over the fence to catch it and it would only be a sac fly. The Yankees trailed 2-1 after 3 innings.
4th Inning
The Yankees had two consecutive walks with 2 out but could not score; the White Sox were set down 1-2-3.
5th Inning
Brett Gardner came to the plate with Ellsbury on second, representing the tying run. However, Gardner struck out. The White Sox turned on its offense in the bottom half. First, Saladino’s single extended the lead to 3-1; after Diego Moreno came in, Melky Cabrera homered AGAIN for his SECOND home run of the day to give the White Sox the 6-1 lead.
6th Inning
Brian McCann came to the plate with runners on the corners but could not produce; Diego Moreno allowed a single but held the White Sox scoreless in the 6th.
7th Inning
The White Sox added on two runs off of a Ramirez double and a Moreno wild pitch. The White Sox led 8-1 after 7 innings.
8th Inning
Neither team threatened in the 8th. Nick Rumbelow, called back up by the Yankees today, pitched a scoreless 8th. He was called up and Nick Goody was sent down after last night’s game.
9th Inning
Brian McCann hit a solo home run to right, but the Yankees still lost by a score of 8-2.