Keys for the Yankees success down the stretch

By Chad Raines - August 17, 2015
With just over a month and a half left in the 2015 regular season, the New York Yankees find them themselves in a sudden dog fight for first place. Following the Yankees 5- game losing streak, countered with the Toronto Blue Jays 10-game winning streak, the Yanks abruptly fell out of first place for the first time since July 1st. Demands and expectations in the Bronx are high as the Yankees are looking to reach the postseason for the first time since 2012; anything short of that would be considered a disappointment in the eyes of the Yankee faithful. Going forward, the Yankees have a few things that must go right in order for them to find themselves playing past the first week in October. 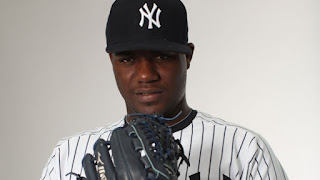 Although many fans doubted the Yankees decision to not go after any pitching before the Trading Deadline ended, the Yanks have thrown exceptionally well over the last week despite losing their hold on first place. During their 5-game losing streak, Yankees pitching owned a mere 2.77 ERA. Luis Severino has been a nice breath of fresh air as he has certainly given the team a chance to win both times he has taken the mound in his young big league career.

Michael Pineda is a big piece of the puzzle that the Yankees dearly need back. Some say numbers never lie, but Pineda’s 2015 3.97 ERA is deceiving. The tall 6’7” RHP has had his ups and downs all year, but between April, May, and July, Michael Pineda owns a 3.41 ERA and a 16 strikeout performance on Mother’s Day against the Baltimore Orioles. The return of Pineda will give the Yankees options. Their current 5-man rotation is Masahiro Tanaka, CC Sabathia, Nate Eovaldi, Ivan Nova, and Luis Severino. Manager Joe Girardi can either expand to a 6-man rotation to stretch his starters out an extra day, or he may opt to move Sabathia to the bullpen. The Yankees need Michael Pineda to return to his old self in order to take stress off of the rotation and to give the Yankees that extra boost down the stretch.

Offensively, I think we all know who I’m about to discuss. Yes, Stephen Drew. Stephen has had a bizarre year to say the least. We are halfway through August and Drew is batting .195, but he has shown some pop belting 15 home runs this season while driving in 35 runs. Yankees fans everywhere desperately want an upgrade at second base. The Yankees #5 prospect Rob Refsnyder has been productive in AAA this season batting .282 with 8 home runs and 48rbi. I don’t think Yankees fans can expect to see Rob until September call-ups, although it’s going to be painful to watch the Stephen Drew and Brendan Ryan platoon show in the meantime. In order for the Yankees to get going, they need a productive offensive second baseman. Although Chase Utely has recently cleared waivers, I think their answer comes from within the organization with Refsnyder.

Didi Gregorius has been great for the Yankees of late batting .308 over his last 30 games and the Yankees will need him to continue to be productive as they surge towards October.  Jacoby Ellsbury is one of the best leadoff hitters in baseball when all is right, but he has hit just under .200 since returning from his knee injury earlier in the season. Speed is a big part of Ellsbury’s game, yet he hasn’t successfully stolen a base since May 16th.  The Yankees need their table setter to get it together and become the 5-tool threat that he can be. If the Yankees can get Ellsbury going at the top of the lineup and mix in a second baseman who can hit over .260, the Bronx Bombers will be the team to beat in the East.