By Chad Raines - August 16, 2015
The Yankees won 4-3 in Game 1, thanks to Carlos Beltran’s three-run home run in the eighth inning for a come from behind win. The Yankees win snapped the Blue Jays’s eleven-game win streak and gave New York the half-game lead in the American League East. For Game 2, Toronto sent Marco Estrada (10-6, 3.21 ERA) and the Yankees countered with Masahiro Tanaka (8-5, 3.79 ERA). These two matched up on August 9 in New York, where Toronto won 2-0. In that game, Tanaka allowed two solo home runs by Josh Donaldson and Jose Bautista, which were the differences in the 2-0 score. 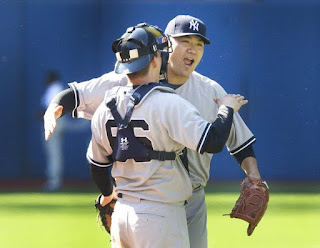 Game 2 (Saturday, August 15) - New York Yankees 4 @ Toronto Blue Jays 1
1st Inning
Carlos Beltran got the scoring started for the Yankees with his 2-out home run into right field. The Blue Jays did not threaten in the bottom of the first. The Yankees led 1-0 after one inning.
2nd Inning
The Yankees went down 1-2-3 in the top of the 2nd. In the bottom half, Chris Colabello, who was now 13-21 against the Yankees lifetime, got the inning started with a single. However, the Blue Jays grounded out three batters in a row and Tanaka was able to escape any threat there.
3rd Inning
Jacoby Ellsbury’s 1-out triple was wasted because Gardner and Teixeira were unable to bring him home. Toronto continued to trail as Tanaka retired them with ease, working around a walk to Josh Donaldson.
4th Inning
Marco Estrada set the Yankees down in order quickly. In the bottom half, Edwin Encarnacion doubled to left to lead off the 4th, extending his hit streak to 13 games. However, Colabello grounded out sharply to Didi Gregorius, Dioner Navarro struck out, and Kevin Pillar lined out to right. Carlos Beltran made an excellent basket catch, one he hasn’t made a lot this year. The Yankees led 1-0 after four innings.
5th Inning
Estrada set the Yankees down in order for the second straight inning. Ryan Goins walked and then Ben Revere singled to put runners on first and second with none out. Troy Tulowitzki then walked on four pitches to load the bases with none out. On the 2-0 pitch, Donaldson hit a very high fly ball that Gardner caught right before the warning track. It was a sacrifice fly that tied the game at 1. Jose Bautista, struck out on a 1-2 splitter and then Encarnacion lined out softly to Stephen Drew at second, who got a nice jump to make the catch. The game was tied at one at the end of five innings.
6th Inning
Mark Teixeira broke the 1-1 tie with a DEEEEP solo home run to right with two outs! Just as it looked like Estrada might cruise through another inning, Teixeira helped the Yankees take the 2-1 lead. Later in the inning, Greg Bird nearly missed his first career hit and home run as the ball just drifted foul down the right field line. In the bottom half, Tanaka set the Blue Jays down in order.
7th Inning
Stephen Drew got a hit but otherwise the Yankees went down 1-2-3 against Toronto's new pitcher, Mark Lowe, who came in for Estrada to start the 7th. In the bottom half, Tanaka struck out two and set the Blue Jays down in order.
8th Inning
LaTroy Hawkins entered the game in the 8th. With one out, Carlos Beltran nearly hit his second home run of the day, but it just missed it by a foot and he settled for a double. The next batter, Mark Teixeira, singled and pinch-runner Chris Young scored from second to extend the Yankees lead to 3-1. Greg Bird got his FIRST Major League base hit with a single to left with two outs. In the bottom half of the 8th, Encarnacion singled with two out but otherwise Tanaka retired the Blue Jays without issue.
9th Inning
In the 9th, Aaron Loup relieved Hawkins. John Ryan Murphy's leadoff double, Drew's subsequent bunt, and Ellsbury's single extended the Yankees lead to 4-1. Later in the inning, Brett Gardner finally stole a base for the first time since June 12. Masahiro Tanaka came back out for the 9th and he finished off his 5-hit, complete game with a 1-2-3 inning.