By Chad Raines - August 12, 2015
In the month of August, the New York Yankees have hit for a .198 batting average and a .329 slugging percentage. The Yankees offense is in a slump and some sort of change is needed. It is incredibly unlikely that Joe Girardi will actually mix the lineup up seeing as, well, the team seems to dislike change. Not making any moves at the deadline has definitely backfired, as a 7-game lead has shrunk into a 0.5-game lead heading into the August 12 game at Cleveland. The current lineup has Brett Gardner and Jacoby Ellsbury leading off and Alex Rodriguez, Mark Teixeira, and Brian McCann batting 3-4-5. However, that has not worked as batters 1-5 in the order have not performed at all and they are the players that power the offense. To put it in perspective, the Yankees hit for a .254 average prior to the All-Star break and Gardner, Ellsbury, A-Rod, Teixeira, and McCann are hitting for a combined .147 (28/191) in August! One possible way to mix up the Yankees offense is by changing New York’s batting order. 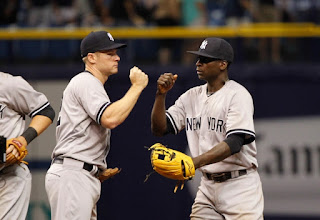 To give further context, the offensive power of the Yankees has decreased since the second half of the year started. In August, the Yankees have scored 35 runs which is 24th out of all Major League Teams. Red-hot Toronto is 3rd in the league with 51 runs and every American League East team has scored more runs in August, even Boston! The Yankees have hit only 10 home runs compared to Baltimore’s 16 and Toronto’s 19. The Yankees have 20 extra base hits, compared to Toronto’s 32 and Baltimore’s 37. They’re in huge trouble within the division as Baltimore is slowly creeping up in the division as well. The most common argument I have heard is that the team is on a cold streak; however, the Yankees have overperformed all year and this was bound to happen.

The best hitters for the Yankees in August have been Didi Gregorius and Chase Headley. Gregorius has 11 hits in 31 at-bats and Headley is 8 for 30 and both are the only hitters that play regularly with batting averages of over .250. Headley and Gregorius have 28 hits each since the All-Star break and that leads the team. Didi has a batting average of .359 while Headley is second on the team with a .341 batting average since the break. The current 1-2 hitters in the batting order, Ellsbury and Gardner, have hit for a combined 29 for 169 (.172). This has extremely hurt the lineup because if the first two batters can’t reach, A-Rod and Teixeira are coming up with one or no men on the bases and their job as run producers cannot happen. Didi and Chase Headley have also combined for 8 doubles since the All-Star break, which is more than Gardner and Ellsbury’s combined 4. Additionally, Didi and Headley have 72 total bases since the break while Gardner and Ellsbury have 47 total. Clearly, Gregorius and Headley have led the Yankees offense and it is time for them to move up in the lineup. There is a huge disparity between their production and Gardner and Ellsbury’s production.

The Yankees should move Didi Gregorius and Chase Headley to the top of the lineup. Gregorius isn’t Brett Gardner-speedy by any means, but Gardner hasn’t stolen a base since early June so there’s no difference. Ellsbury also hasn’t stolen any bases since going on the disabled list this year so there is no difference there as well. Didi would bat leadoff and Headley would bat second. There are no statistics to support Didi leading off because he hasn’t batted leadoff all year. However, Headley has 153 at-bats and is batting an above average .281 in his at-bats at the #2 position. He has a .331 on base percentage and 43 hits in that role. Even though Didi doesn’t have any experience leading off, he has decent speed and he is reaching base regularly. That’s simply the most important part of the first two batters - reaching base so that the batters after, including A-Rod and Teixeira, can drive them in. The Yankees could easily experiment with this for a couple games since Didi and Headley are hot right now and Gardner and Ellsbury are struggling. Ellsbury would most likely end up in the 6th position and Gardner 7th, as Brian McCann will usually bat 5th on a typical day if he is starting. There’s no issue with Ellsbury batting 6th because he does have some power. Gardner has also struck out 92 times, which is another reason why he shouldn’t bat leadoff. 92 strikeouts is second most on the team after A-Rod’s 95 strikeouts.

Gardner and Ellsbury have combined for an astounding 44 strikeouts since the All-Star break while Didi and Headley have had only 24. Batters leading off should rarely strike out as strikeouts give the opposing pitcher confidence. Didi and Headley have also created 7.03 and 5.93 runs every 27 outs, while Gardner has created only 2.63 runs and Ellsbury only 1.71. In general, players that have improved over time should get the chance to have their at-bats mean more. Specifically, Didi Gregorius has improved significantly since his disappointing start while Brett Gardner has regressed. Didi and Headley hit .206 and .232 in April while Gardner and Ellsbury both hit above .300. However, every month, Didi continued his month-by-month batting average. Once Ellsbury went on the DL, he hasn’t been the same since. After May, Headley has also improved month-by-month in terms of batting average. He even led the team with a .375 average in July and Didi hit .317, which are both very good averages. By contrast, Gardner hit only .247 and Ellsbury only .215.

Numbers simply do not lie. Didi and Headley have performed better offensively and deserve to bat earlier in the lineup. The Yankees offense has been struggling and a change is needed. Since Yankees GM Brian Cashman has refused to bring up Rob Refsnyder from Triple A-Scranton to replace Stephen Drew or make any changes to the roster whatsoever, an internal batting lineup change seems necessary when no other options are now available. I will be the first to admit that I was definitely wrong about Didi Gregorius; he’s been excellent on offense recently and I am excited to see his production, along with Headley’s offense, for the rest of the year. Although unlikely, a lineup change that puts Didi and Headley batting leadoff and second, respectively, would benefit the Yankees greatly.