My Take on Luis Severino’s Debut 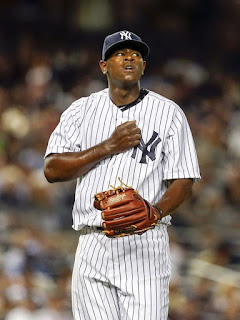 The premier prospect of the New York Yankees, Luis Severino, made his debut in the Bronx last night against the rival, the Boston Red Sox. In a pitching matchup against Boston’s Steven Wright where the Yankee offense was expected to flourish, the Yankees turned its offense off for one night and, as a result, Severino lost his debut, 2-1. Please read my colleague Greg’s game recap if you would like an explanation on why Severino lost this game even though he pitched very well; this piece will only break down Severino’s start.


Severino pitched five full innings, gave up two hits, one of them being a deeeep home run to David Ortiz, allowed one earned run (two runs total), and struck out seven batters without walking anyone. He threw 94 pitches, 59 of which were strikes (62.77%). 11 of the 94 pitches were strikes put into play so including foul balls, called, and swinging strikes, but not including strikes that were counted because the ball was put into play, Severino only threw 48 strikes in 83 pitches (57.83%). Severino’s command wasn’t impressive. It was his debut so I understand nerves were an issue, however, he got into too many deep at-bats with many of the Red Sox hitters that he was never going to get past five innings. In the first inning, it took him 7 pitches to retire Brock Holt and another 6 to strike out Bogaerts. 4 of the first 8 batters he faced in the 1st and 2nd innings had at-bats that were 6 pitches or longer against Severino. 5 of his next 10 batters through the rest of his outing also had at-bats of 6 or more pitches. This is one area that I’d like to see Severino improve upon. It won’t do any good to allow batters to reach extended at-bats, as it allows batters to see the ball better as the at-bats and the innings roll on.

Severino threw four different pitches in his debut - fastball, cutter, changeup, and slider. His fastball ranged anywhere from 94-96 mph on average and it had late action to it. He struck out three batters using his fastball. Severino’s slider was excellent as well and he struck out three batters using it. His strikeout with two outs against Mike Napoli in the 4th was extremely impressive as the slider dropped viciously from Napoli’s belt down to his knees. His velocity was also as expected; there were very few pitches, even his sliders and changeups, that were under 90 miles per hour. However, many times Severino seemed like he was overthrowing and he wasn’t able to locate the off speed pitches. The pitch to De Aza that he hit for a double was a cutter that ran back too far to the middle and the pitch to Ortiz was a mistake as it was a fastball that was middle-middle and Ortiz put it deeep into the right field stands. In his next outing, I hope to see improved control.

Now onto the positive parts of Severino’s outing. He only allowed two hits, both of which, unfortunately, were RBI hits. Alejandro De Aza’s double scored Napoli from second in the 2nd and David Ortiz’s deeeep home run in the 4th made the game 2-0. 8 of his outs were put into play - 5 by groundout and 3 by flyout. It should have been 6 by groundout, but unfortunately, Chase Headley couldn’t make the throw to first. Two of Boston’s best hitters - Hanley Ramirez and Xander Bogaerts - went a combined 0-4 with 2 strikeouts against Severino. Severino also handled the pressure well. With the Red Sox threatening to add more runs in the 2nd, he struck out Swihart after reaching a full count. In the 9 at-bats where Severino threw 6 or more pitches to each batter (he faced 18 batters last night - 50% - this is concerning but I’m sure he’ll get better), he retired all 9. It’s good to see that even if he reaches long counts, he’s able to retire the batter. He retired the last six batters he faced, including three by strikeout. He even reached 97 miles per hour on the second to last pitch he threw last night. His outing was very fun to watch; there was serious late action to his pitches and it fooled many of the experienced Red Sox hitters.

In Triple-A Scranton this year, Severino threw 61.1 innings, allowed only 40 hits and 13 earned runs, and walked only 17. He struck out 50 as well and batters hit .184 off of him. In his 11 starts at Scranton, he allowed four or less hits in NINE out of 11 outings! He also allowed two or less earned runs in TEN of his 11 starts! He’s allowed only 5 home runs this year and 8 in his entire Minor League career. Some people have compared him to the next Joba Chamberlain or Phil Hughes. To put it simply - we shouldn’t even mention Severino’s name in the same sentence as Joba or Hughes. Severino’s outing tonight really showed that his future is extremely bright and I can’t wait to watch young Luis Severino develop into a great starter for the rest of the year.