By Chad Raines - August 12, 2015
When the Yankees passed up on rotation aces David Price, Cole Hamels and Johnny Cueto it wasn’t because they didn’t want them, but because the Yankees had a gem of their own they weren’t willing to give up. 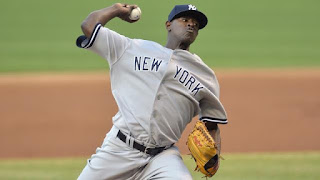 Luis Severino has only made two career major league starts, but I think the 21-year old might be even better than expected.

On Tuesday night, Severino not only pitched six solid innings, but made big pitches when he needed to keep the Yankees in the game. Severino was hit hard early on giving up two runs in the first two innings, including a 26 pitch first inning. At this point, EVERY Yankees fan was thinking the same thing, “Here we go again he’s not that good.” Or “We passed up on Price and Hamels for this guy?” But we have to remember this is a 21-year old making his first start on the road.

Many young pitchers would have unraveled in that situation, on the road in a tough spot facing a team that had scored 34 runs in their last three games, but no Severino  kept his cool and showed the Yankees that he can pitch in the big leagues. He retired 12 of the last 14 batters he faced and finished with six innings pitched allowing two runs, seven hits and two strikeouts. Severino threw 97 pitches on the night 57 of them for strikes. I was impressed with the way he settled down and gathered himself. After the first inning he was on pace to throw 234 pitches in nine innings but I think Girardi would have taken him out before then, but again its Joe Girardi so you NEVER know.

Most impressive was Severino maintaining his velocity into the sixth when the fastball was clocked at 95-to-96 mph consistently. In 11 innings pitched in the majors, Severino has given up four runs, only three earned thanks to the great defense by Chase Headley this year, and he has given up nine hits. The Yankees may have lost to the Cleveland Indians 5-4 in 16 innings on Tuesday, but Severino gave them another quality start and something for Yankees fans to believe in every fifth day.

It’s hard to tell what the Yankees will get from Sabathia, who has been good in his past two starts, Nova who is inconsistent, Evoldi who is hit or miss and Tanaka who is usually good but again you never know. Severino showing maturity can make him a better pitcher but for now each and every start he makes will hopefully bring him closer to who the Yankees want him to be, the ace of their ailing rotation.