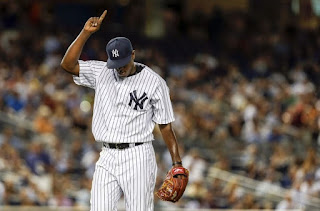 Luis Severino finally made his debut against the Red Sox in a game that we have all anxiously been waiting for. Steven Wright started on the mound for the Red Sox. It looked to be an easy win the way the Yankees offense has been lately, and with Severino on the mound.


Severino started the game off good putting the Red Sox down 1-2-3 in the top of the first inning. The Yankees also didn't score in the first.

The second inning began with 2 straight outs, Hanley Ramirez popping out, and Pablo Sandoval grounding out. Severino got Mike Napoli to hit a ground ball to Chase Headley, but he threw the ball over the head of Mark Teixeira which allowed Napoli to advance to second. De Aza then doubled off of Severino to score Napoli and put the Red Sox up 1-0.

There was no more action in the game until the top of the 4th. Luis Severino got behind in the count and threw a fastball down the middle to David Ortiz which ended up a home run, his first given up in his career. This made the game 2-0.

The Yankees picked up their first hit in the bottom of the 5th. Their offense struggled off of Wright much more than they should have. Didi Gregorius singled, and John Ryan Murphy singled, but that was all they could do that inning.

Adam Warren came in to pitch for the 6th inning, leaving Severino's line at 5 innings pitched, 2 hits, 1 earned run, 2 runs, no walks, and 7 strikeouts. He was the first pitcher in AL history to have 7 K's, no walks, and 2 hits or fewer in his debut.

The Yankees didn't score until the bottom of the 7th inning. Carlos Beltran led the inning off with a solo home run. This put the Yankees down 2-1, but it would be their only run of the game.
Adam Warren threw for 3 innings, and Chasen Shreve threw for 1, both not allowing and more runs. Both of them also only allowed 1 hit.

The Yankees would lose 2-1 and Luis Severino would get the loss in his debut. Chase Headley's error in the second inning proved to be very costly in this one.