Should We Be Worried About Alex Rodriguez?

By Chad Raines - August 17, 2015
If I were to tell any Yankees fan last winter that Alex Rodriguez would bat .265 with 24 HRs, 63 RBIs, and an .873 OPS in 2015 would they believe me? Chances are they would not. Many fans thought it was impossible for a forty year old with two hip replacements who hasn’t played a full season in about five years to perform anywhere close to his former self. Fortunately, the numbers stated above are A-Rod’s stats in mid August. Most fans would have signed for those stats in a heartbeat for the entire season. Rodriguez has been an integral part of this team, both on the field, and also as a leader in the clubhouse. That being said, he’s a huge part of the reason we currently sit atop the division. On the Yankees most recent road trip, A-Rod went 2-22. A-Rod hasn’t hit a home run since July 27th, his fortieth birthday. He’s also batting .152 in his last twelve games. While many fans are deeply worried about Rodriguez, I’d like to explain why I am not. 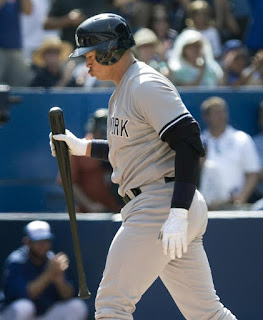 A-Rod has been lost at the plate lately. It seems as if he is in an 0-2 hole every single at bat. Once he gets into that hole, it’s almost guaranteed he won’t get anything to hit, unless the pitcher makes a drastic mistake. While Alex has always been a patient hitter, and that is one of the many reasons for his success, he needs to swing at the first pitcher every now and then. Pitchers are taking advantage of this tendency and giving him a fastball right down the middle to open many counts. If A-Rod would swing at some of these pitches, then perhaps the pitchers will have to make adjustments when dealing with him. He also has been swinging at a lot of pitches out of the strike zone of late. Since he insists he feels fine physically, I don’t want to jump the gun. We can only hope and pray he turns it around soon.

Aside from the interests of the Yankees, Alex Rodriguez is one my favorite players of all time so I have a personal stake in his success. Throughout his entire career, it seems as if A-Rod always performs best when he is doubted the most. Whenever he is expected to succeed he usually doesn’t. From 2004-2008, despite putting up truly remarkable numbers, he was ridiculed by many fans for his failure to produce in clutch situations. After his first PED confession in 2009, it appeared as if Rodriguez got the big hit whenever he was called upon. His postseason that year was truly remarkable. It’s amazing to me that after his suspension in the Biogenesis scandal, many Yankees fans abandoned him, and completely forgot that he basically carried this team to a World Series Championship in 2009. After returning from his season long 2014 suspension, and being counted out by just about everyone, Rodriguez put up All-Star worthy numbers in the first half, and continued at his torrid pace through much of July. Unfortunately, he has cooled off like a popsicle in August.

I’ve been one of Joe Girardi’s biggest critics when it comes to resting players, but in my wholehearted opinion, A-Rod needs rest, and he needs it NOW. I think giving him a day off in Toronto was a wise decision, however I believe he needs to be given a series off. With three or four consecutive days off, Rodriguez would have adequate time to give his body a breather and make much needed adjustments at the plate. From what I’ve gathered, there is nobody in the game who works harder than Alex Rodriguez. There’s a real possibility that A-Rod is just done. All those years of taking PEDS may have finally caught up to him, or maybe it’s just natural for a forty year old to decline.

Say what you want about him, but Alex Rodriguez has proven why he is a necessary member of this team. His production this year, along with that of Mark Teixeira, helped carry the Yankees for the first couple of months before the rest of the bats got going. Rodriguez is also a media magnet, so he has been able to take much of the attention away from younger players like Didi Gregorius. Had the media not had Alex Rodriguez to focus on, they may have excoriated Didi for his horrendous beginning to the season, the successor to our beloved Derek Jeter. Who knows if he would have been able to turn his season around if he was constantly being attacked on the back pages of the New York Post everyday.

Despite his age and possible fatigue, I have no reason to believe Alex Rodriguez simply forgot how to hit a baseball. Every player goes through stretches like this, so we can only hope A-Rod will rebound from it because believe it or not he is necessary for an October push. Rodriguez’s current struggles sort of remind me of what Mariano Rivera would go through each August towards the end of his career. He would always have a stretch of bad outings, which led many to question whether or not he could still perform at the level we had all grown accustomed to him performing at. Time and again Mariano proved his detractors wrong. I’m only hoping A-Rod can do the same thing. A-Rod’s struggles began during the series against Toronto at Yankee Stadium last week. For the last week or so the entire team has been in a slump. It’s unfair to blame the offensive struggles of the entire team on A-Rod, even though he has hit into quite a few rally killing double plays lately. With the exceptions of Jacoby Ellsbury and Carlos Beltran, both of whom have been swinging the bat very well of late, our offense has been anemic for the most part.

It’s very sad to witness a star athlete struggle towards the end of their career. We sort of had to endure this with Derek Jeter last season, but since the team wasn’t really in the playoff picture, his struggles weren’t as pronounced. I really hope this isn’t what we are seeing with Alex Rodriguez.

Considering how hard he was pounding balls last month, it’s hard for me to believe he’s begun a sporadic decline mid-season. Every player goes through slumps, and unfortunately when a forty year old with two hip replacements goes through his slump many people begin to panic. Girardi should rest A-Rod for the upcoming series against the Twins, and then insert him back into the lineup this weekend against the Indians. If he continues to struggle, he should be moved down in the lineup into the fifth or sixth hole, until he can overcome said struggles. While many members of the Yankees universe are panicking over A-Rod’s recent slump, I am patiently sitting back and waiting for him to return to the dominant force he was for this Yankees team until recently. I for one have complete faith in Alex Rodriguez. I just hope I’m not letting my personal bias cloud reality.