By Chad Raines - August 02, 2015
In its first game after the trade deadline passed, the Yankees started a 3-game set against the Chicago White Sox at US Cellular Field. The Yankees split its series against the Rangers in Arlington. In its sole trade deadline move, the Yankees acquired 2B/OF Dustin Ackley on Thursday from the Seattle Mariners for RHP Jose Ramirez and OF Ramon Flores. They also announced the call-up of Luis Severino next week to start in one game of the Red Sox series. The Yankees sent Nathan Eovaldi (10-2, 4.27 ERA) to counter Chicago’s Carlos Rodon (4-3, 4.09 ERA). The Yankees won 13-6. 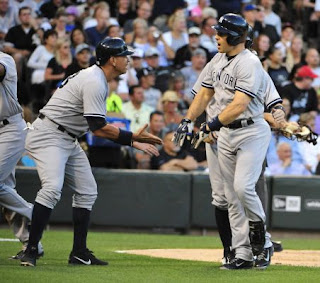 Game 1 (Friday, July 31) - Yankees 13 @ White Sox 6
GAME SUMMARY
1st Inning
After A-Rod doubled and Mark Teixeira walked with 2 out, Carlos Beltran, doubled home A-Rod to give New York the 1-0 lead. In the bottom half, Eovaldi worked around a leadoff walk and struck out two.
2nd Inning
John Ryan Murphy and Brendan Ryan singled consecutively to lead off the inning. After a Gregorius sacrifice bunt and Ellsbury lineout, Chris Young walked. Then, A-Rod hit an infield single between second and short to give the Yankees the 2-0 lead. The next batter, Mark Teixeira, drilled a GRAND SLAM to center for his 27th home run and the Yankees led 6-0! In the bottom half, Eovaldi struck out two more and worked around a single by Alexei Ramirez single.
3rd Inning
Carlos Rodon bounced back from a miserable start and set the Yankees down 1-2-3. In the bottom half, Jose Abreu hit his 18th home run to right center with Adam Eaton on third. Yankees led 6-2 after three.
4th Inning
The Yankees scored more in the 4th. After Chris Young scored on a wild pitch and Rodon walked A-Rod, Matt Albers relieved Rodon. Albers’s first batter was Mark Teixeira, who hit his SECOND HOME RUN of the day with A-Rod on! The Yankees added two more off of Albers with three singles, a walk, and a sac fly.
5th Inning
Chase Headley made it 12-2 with an RBI single, and the Yankees continued to pile on. Eovaldi allowed a RBI single to Melky Cabrera, but the White Sox could not cut the deficit any further.
6th Inning
Jacoby Ellsbury had an RBI single in the 6th that gave the Yankees its 13th run of the night. Adam Warren relieved Nathan Eovaldi after 5.2 IP in the bottom of the 6th.
7th Inning
Dustin Ackley made his Yankee debut, pinch hitting for Carlos Beltran in the top of the 7th. He grounded out to second. He then stayed in the game at LF in the bottom of the 7th. JB Shuck had an impressive half inning for the White Sox. He tripled home Saladino and then scored on Warren’s wild pitch. The White Sox trailed 13-5 after 7 innings.
8th Inning
Neither team did much in the 8th. The Yankees loaded the bases but could not score as Ackley grounded out to shortstop. Adam Warren finished off his 2.1 IP of relief with a scoreless 8th.
9th Inning
Adam LaRoche pitched for the White Sox in the 9th, making it the second time the Yankees have faced a position player this week. He recorded a 1-2-3 inning, much to the dismay of Bronx Bomber Blogger writers. In the bottom half, LaRoche added a run for Chicago on a RBI single, but Nick Goody recorded the last 3 outs for the Yankee win.