The Bird is the Word! Greg Bird’s two homers propel Yankees to Sweep of Twins

By Chad Raines - August 20, 2015
The Yankees won the first two games of its series against the Twins 8-7 (F/10) on Monday and 8-4 on Tuesday. The Yankees sent Nathan Eovaldi (12-2, 4.26 ERA) to face Minnesota’s Ervin Santana (2-3, 5.66 ERA) and try to get the sweep against the Twins. Eovaldi has won three of his last four starts. In his last seven games, he’s gone 4-0 with a 3.70 ERA. He gets the second most run support in the Majors behind Toronto’s Drew Hutchison, who was recently demoted to Toronto’s Triple-A team. Ervin Santana has lost three of his last four outings and hasn’t pitched past the sixth inning in any of those starts. He gave up five earned runs on eight hits in six innings in his last outing against Texas. 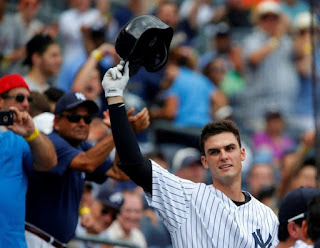 Game 3 (Wednesday, August 19) - Minnesota Twins 3 @ New York Yankees 4
1st Inning
Nathan Eovaldi struck out Joe Mauer on his way to a 1-2-3 inning. Jacoby Ellsbury led off and hit the first pitch back up the middle for a single to extend his hitting streak to seven games. However, the Yankees couldn’t bring him home as he was left on base.

2nd Inning
Eovaldi struck out the side in a 1-2-3 inning by striking out Miguel Sano, Trevor Plouffe, and Eddie Rosario. Chase Headley has now reached base safely in 25 of his last 26 games; he reached on a hit-by-pitch with one out. However, Didi Gregorius grounded into a 4-6-3 double play to end the inning.

3rd Inning
Eovaldi remained perfect through three as he set down the Twins in order. Ellsbury’s 3-6-1 double play erased Drew’s single and the inning was over. The game was scoreless through three innings.

4th Inning
12 up, 12 down as Eovaldi set the Twins down in order. In the bottom half of the fourth, Greg Bird sent a fly ball DEEEEP to right field and THAT BALL WAS GONE! With Beltran on first with two outs, Bird hit his FIRST career home run to put the Yankees ahead 2-0 after four innings.

5th Inning
15 up, 15 down as Eovaldi remained perfect through five. Santana set the Yankees down in order with help from Dozier as he made a nice over-the-shoulder catch on Ellsbury’s bloop fly ball to end the inning.

6th Inning
After falling behind to a 3-0 count, Eovaldi struck out Escobar with another 100-mph fastball. The next batter, Chris Hermann, promptly hit a bloop single over third base and Headley and the perfect game effort was over. The bases were loaded for Joe Mauer with two outs and Mauer delivered as his two-run single on a 1-2 fastball tied the game at 2. Trevor Plouffe gave the Twins the 3-2 lead with an infield single after the bases were loaded. The Twins used four singles and two walks to take the lead. In the bottom half, Beltran walked with two outs and then GREG BIRD HOMERED AGAIN! He sent Santana’s pitch into the Yankee bullpen and the Yankees went back on top 4-3! BIRD IS ON FIRE! 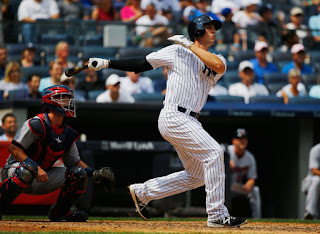 7th Inning
Eovaldi came back out to start the 7th and set the Twins down in order. His 120th and last pitch of the day was a 101-mph fastball. This man’s arm was clearly not tired. The Yankees went down in order.

8th Inning
Chasen Shreve came in for Eovaldi to start the eighth. Joe Mauer reached on a deflected infield single to shortstop and reached second on a wild pitch but Shreve struck out Sano to end the inning. Trevor May relieved Santana after 7.2 innings as Greg Bird came up with Alex Rodriguez on first.

9th Inning
With Andrew Miller unavailable after pitching two straight days, Dellin Betances was the closer for today and he set down the Twins in order for a 4-3 win.

1. With Mark Teixeira injured in Game 1 after fouling a pitch off of his leg, Greg Bird stepped in and started Games 2 and 3 and came up huge. Bird went 5-9 with 3 runs scored, including the game winning run on Monday, hit 2 home runs today, and had 5 RBIs.

2. This was the first 3-game series sweep for the Yankees since sweeping Baltimore at home from July 21-23. Because Toronto had an easy opponent in Philadelphia, it was important that the Yankees kept their now 1.5-game lead in the American League East.

3. The Yankee offense looked like they are back - they scored 20 runs this series, had 28 hits in 25 innings, and improved in RISP hitting, even though it needs to be better.

4. Dellin Betances continues to dominate hitters as today was his 18th straight scoreless appearance and he’s recorded 3 outs or more 17 out of the 18 times. He has 30 strikeouts over the last 20.1 innings.

5. According to Jack Curry of the YES Network, Nathan Eovaldi threw 25 pitches of 100 miles per hour or more. That statistic is simply incredible.

6. CC Sabathia and Nathan Eovaldi’s perfect game efforts lasted 13 outs and 16 outs, respectively, and both looked good until that same inning where they lost the perfect game. Both pitchers have pitched better as of late and both their outings this series were better than average and it’s an encouraging sign for a starting rotation that’s still filled with question marks.

LOOKING FORWARD
The Yankees don’t have an off day and start a 4-game series against Cleveland immediately in Yankee Stadium. In Game 1, Ivan Nova (5-4, 3.57 ERA) faces Josh Tomlin (0-1, 2.84 ERA) with the first pitch at 7:05 PM ET. In Game 2, Masahiro Tanaka faces Carlos Carrasco with a 7:05 PM ET start. Both games on the weekends, Games 3 and 4, start at 1:05 PM ET and feature Luis Severino against Danny Salazar on Saturday and then most likely CC Sabathia against Trevor Bauer in the series finale on Sunday. The Yankees lost two out three when they traveled to Cleveland last week so they are looking for revenge in this series. The Yankee offense has woken up and they must continue to support the pitchers, who have pitched well since the All-Star break; this is especially true for Luis Severino who has received very little run support in his three starts.