The Usage of Adam is UnWarren-ted

By Chad Raines - August 12, 2015
From 7th inning bridge for the big two of Betances and Miller in 2014, to most consistent starter in 2015, to a limited role out of the pen, Adam Warren hasn't done anything to deserve what's happened to him. 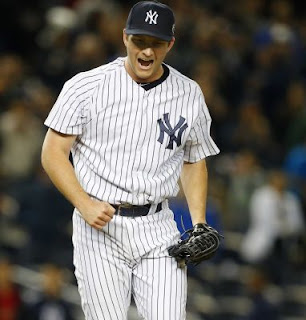 Including Sunday's appearance, which clearly wasn't one of his best, it's been six straight trots in from the pen where you wonder what his role with the Yankees has become. The lead or the difference in each is: Yankees down four, up fourteen,up ten, down two, down four, and down two. This is the same pitcher who pitched to a sub-three ERA with a 1.1 WHIP a year ago in a prominent bullpen role. Huh?

Let's continue down the long, steep path, showing us how poorly Adam has been treated. As a starter this year, I'm willing to say he was the most consistent one we had during his time in the rotation. In 14 starts this season, Warren pitched to a 1.19 WHIP and a .240 BAA. According to fangraphs, he's a tweener; in between 1.1 which they state is "great" and a 1.25 which is "above average." So falling in between a above average and great WHIP constitutes a removal from the rotation I suppose. Most frustrating part is something that has been beat like a dead horse; what is CC Sabathia still doing in the rotation?

Even after posting the plus starters numbers, I can live with the decision to move Warren to the bullpen. It adds depth to a pen that could use it. That same depth could help relieve some of the arms the Yanks are desperately going to need down the stretch. But, use him in a prominent role, not a mop-up job. He's pitched to a .209 BAA out of the bullpen, and hasn't allowed a single home-run after allowing eight in the rotation. His K/9 is way up because he's able to air it out more frequently in the pen. He fit so snug in his seventh inning role last year, why not move him into a similar situation if you're going to station him with the other bullpen troops?

The bottom line is, Adam Warren is being mistreated and mishandled and he has every right to be upset about it. Clearly he's nothing but a professional because there hasn't been a peep from him. I'm not one to point fingers at managers but I don't see many others to blame other than Girardi at this point. It'll be a shame if nothing changes and he continues to pitch in games he doesn't have business pitching in. The Yankees will need him in a big spot, in a big game going down the line, not down seven in the eighth inning.