By NYY v BOS - August 08, 2015
The waiver trade market is in full swing now with several clubs making moves these last few days. Nick Swisher, Michael Bourn, Chris Johnson, Mike Napoli and Oliver Perez are the biggest names to have moved recently and it seems like there are surely more to come.

One name that has been rumored to likely hit waivers is that of Chase Utley. While there has been no confirmed interest thus far, it has been widely speculated that the Yankees amongst other teams would be interested in making a claim on the former slugger should they get a chance to. 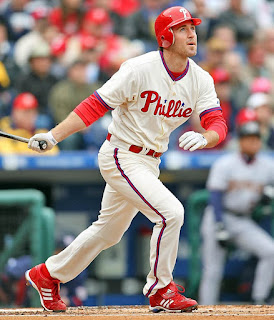 He certainly hasn't been on track this year as Utley is hitting a Stephen Drew-like .179 AVG with only four dingers in what's been a forgettable, injury riddled season for the Phillies second baseman. In fact, Utley's season sank so low at one point that he was benched for a few days. Being benched on the Phillies is not something you want on your resume.

I think the best way to assess the need for Utley would be to compare him to incumbant second baseman Stephen Drew. I made a simple chart comparing the two in some basic stat categories to gauge who's production would be more useful to the team:

It might sound weird, but there is actually a player that has been worse than Stephen Drew this year! As you can see, Drew has out performed Utley in every way so far this year. I will note that at Utley's 66 game pace, if he had played 93 games, he would have 35 runs batted in which would be more than Drew.

What if we give Utley the benefit of the doubt and say his poor numbers this year are a result of injury and instead plug his paces from last year into 93 games and see how they compare with Stephen Drew?

We can't assume Utley would assuredly play like this, but if he did put up numbers as he did last year, he would represent a pretty sizable upgrade at second. Both Drew and Utley are going to be either at or below average defensively (Stephen Drew is not and above average defender, we can stop with that nonsense now), so it would be a wise idea to go with the superior offensive production that Utley would bring.

A trade for Utley would be a true high risk high reward move. If acquired, said trade would be banking on Utley being more likely to put up numbers like he did in 2014 rather than the numbers that he has so far this year. Finances, shouldn't be an issue, as Utley is set to hit the open market after this year, thus the team wouldn't be stuck with a bad contract should he not pan out. However, giving anything to acquire Utley only to have him continue struggle as he has would be a loss.

I can't say I would be for an Utley trade, but I certainly wouldn't be against it. I personally would rather try giving Rob Refsnyder a legitimate chance at second first; Stephen Drew has simply got to go. However, Utley would surely be rejuvenated by a move to the short porch in Yankee Stadium, but I would stay away from a trade if it costs anything more than C/B level prospects.

All stats via Baseball-Reference