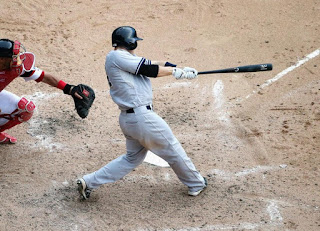 Game 3 (Sunday, August 2) - Yankees 12 @ White Sox 3
GAME SUMMARY
1st Inning
Jacoby Ellsbury started the Yankee offense quickly, swinging at a 1-0 pitch from Samardzija and sending it over the center field fence for a leadoff home run. The Yankees led 1-0 after one. 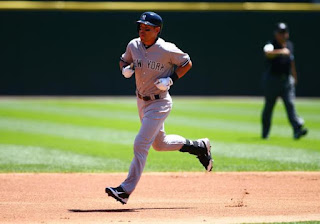 2nd Inning
Neither team scored in the 2nd nor threatened.

3rd Inning
The White Sox had Adam Eaton on third with two out, but Ivan Nova struck out Saladino swinging to end the threat. The Yankees kept its 1-run lead after 3.

4th Inning
The Yankee bats awoke in the fourth. After the Yankees loaded the bases with 2 singles and a walk, Didi Gregorius singled to bring home 2 runs. Then, Drew singled and then Ellsbury hit a sacrifice fly. Brett Gardner brought home the 5th run of the inning on another RBI single. The White Sox went down 1-2-3 and did not threaten in the 4th.

5th Inning
The Yankees put this game away in the fifth, scoring three times to lead 9-0 after 5. Mark Teixeira homered to lead off the inning, and after Scott Carroll came in for the White Sox, Stephen Drew’s 2-run double gave the Yankees a 9-0 lead.

6th Inning
The Yankees went down quickly; the White Sox got on the scoreboard with a Melky Cabrera singled that cut the deficit to 9-1.

7th Inning
Stephen Drew’s 2-run triple (what a day for him!) brought Headley and Gregorius home. Drew himself came around to score on the next at-bat when Jacoby Ellsbury grounded to short. After Shreve relieved Nova, he allowed 2 runs. Ramirez and Geovany Soto both homered, but the White Sox still trailed 12-3. 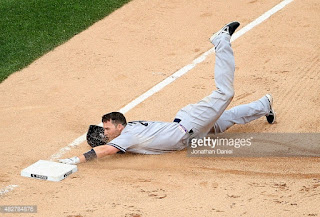 8th Inning
Neither team scored in the 8th nor threatened.

9th Inning
Scott Carroll set the Yankees down in order. Andrew Miller came in to get some work after having rested for a long time; he retired the side to give the Yankees a 12-3 win and a series victory.

4. Ivan Nova is progressing as he returns from Tommy John surgery. He has decreased his ERA by .32 since his last loss on July 11 and he has won his last 3 outings. He matched his season-high total of 7 strikeouts today.

5. Dellin Betances has not allowed a run in 10 straight appearances - not even an unearned run. He has only allowed 3 hits in that span and he has pitched 11 innings in his last 10 games. Since allowing 1 run against Oakland on July 7, his ERA has decreased .33 to 1.32.

6. John Ryan Murphy may not play every day, but he took on a bigger role in this series as there were many LHP starters. In his last 7 games, he’s hitting .391 (9-23). He is quietly having a good year as Brian McCann’s backup.

LOOKING FORWARD
The Yankees return home to face its rival, the Boston Red Sox, in a 3-game set in the Bronx. In Game 1, Boston will debut Henry Owens for his Major League debut against Masahiro Tanaka. In Game 2, Luis Severino makes his debut for the Yankees against Steven Wright. Game 3 features Boston’s Eduardo Rodriguez against New York’s CC Sabathia.