The Yankees Are In Real Trouble

By NYY v BOS - August 12, 2015
The Yankees are in real trouble. They're reaching a point in the season in which they have to swim or will sink for good.

The Yankees losing streak has now been pushed to four after suffering a 16 inning loss to one of the worst teams in the league in the Cleveland Indians. The Indians aren't really to blame though. I was at the game and I saw a Yankees team with absolutely no drive or passion do everything they could to try and lose that ballgame.

When you see a team lose on TV it's one thing, but seeing the Yankees in person last night said so much more. Arod and Carlos Beltran refused to show any hustle and run out ground balls they could've at least made close. Andrew Miller looked completely lost trying to save the ballgame before eventually blowing it. Mark Teixeira and Jacoby Ellsbury were 0-6 and 0-7 respectively. 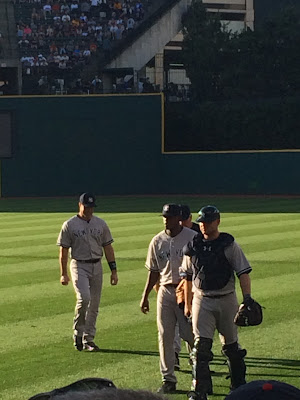 For 16 innings the team was not able to take or maintain a lead against one of the worst offensive teams in the league.

The team has real issues that needed to be addressed at the deadline and having not done so is going to ruin the Yankees shot at a World Series this year. The failure to add starting pitching has added an incredible strain on the bullpen and Betances' & Miller's overuse is finally starting to show. 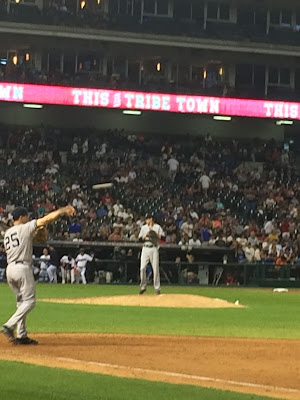 Miller Before Blowing the Save

This squad just looks completely defeated and drained by the dog days of summer.

He did he a home run to open the scoring for the Yankees last night, but Stephen Drew is still batting .192 and his only hits anymore are isolated solo shots.


Arod is hitting .182 this month with a hard hit ball percentage 15% lower than his average on the year which indicates he may finally be coming back down to earth.

Jacoby Ellsbury has been completely lost and has a .158 average in the second half and has a rock bottom like .105 average in the month of August. You can't use injuries as an excuse because he's been back for a while now. It's time for the Yankees to start getting concerned because his contract is no cheapie and he's currently the worst hitter on the team. He went 0-7 last night. Think about that. 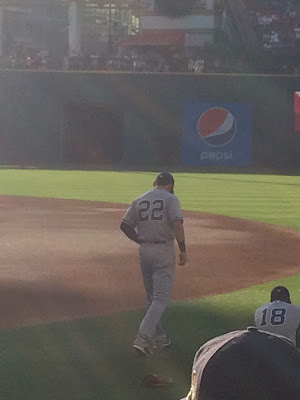 Brian McCann has been absent as well only hitting .148 on the month and .182 in the second half. Meanwhile his pull percentage is a career high 51% as he continues to hit right into the shift. His only hits any more are the only thing the shift can't cover: home runs. Sound like Stephen Drew at all?

Mark Teixeira and Brett Gardner have been having eerily similar Augusts as Tex is batting just .167 (Teixeira has a .321 second half average) and Gardy just .143 (Gardner has a .189 second half average) despite each of them having pretty good weeks coming into the month. Both are still playing outstanding defense, Teixeira in particular, but their bats have been missing and they've been visibly frustrated about it. Brett threw his bat  down after striking out three times last night and Teixeira was pretty clearly upset about the blown lead when it occurred.

But thank the lord these two guys are showing emotion on an otherwise passionless ballclub. Someone really needs to kickstart these guys back into gear. They look dead as hell out there. Now might be a good time for Girardi to step up and show some leadership and prove he deserves to be the skipper of the most prestigious team in sports. Maybe he should get thrown out of a game to fire up the guys or move Didi up in the lineup and considering switching the places of struggling hitters such as Ellsbury and McCann. 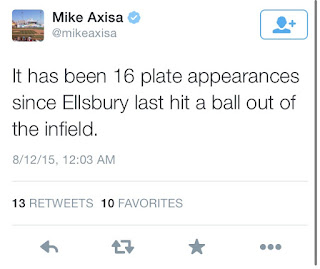 Truth be told the starting pitching hasn't been awful when it comes to limiting runs, but they hardly reach the 7th inning which has been putting a lot of stain on the bullpen, which in turn diminishes their effectiveness.
The one sure Yankee strength that was their bullpen is now becoming weaker.
Even though the starters are limiting runs, they all have their fair share of question marks. CC has been awful all year, minus a few decent starts. Severino has allowed oodles of base runners. Nova and Eovaldi rarely pitch past the 6th. Tanaka has a home run problem. All things the Yankees should be worried.
I'm not here to simply tear the Yankees apart. I love this team, but what I've been seeing is very disappointing and I simply wish to highlight that there are very alarming underlying numbers that are behind this teamwide slump of late. 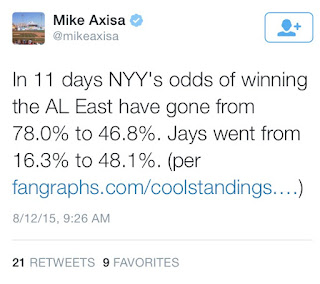 I understand wanting to be optimistic and hope the team turns it around. I certainly hope this losing nonsense stops soon, but I won't lie to you and tell you the team will absolutely turn it around. To champion this team as a lock for the playoffs and serious contender once there would be foolish or naive, if not both. These guys are professionals who get paid millions of dollars to perform on the field, so it's more than fair for us to hold these guys accountable, especially when they represent the New York Yankees.
This team is at a real crucial point in the season. Good teams don't usually go on prolonged losing streaks such as this and it's time to stop the bleeding. The Yankees seriously need to get back on track or else they'll be in real danger of missing the playoffs let alone the division. It's time to do or die boys.