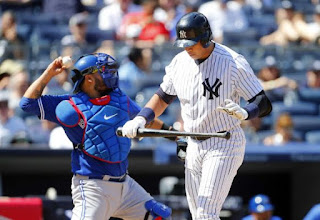 The Blue Jays won the first two games of the series by scores of 2-1 (F/10) and 6-0. Toronto trailed by only 2.5 games entering into Sunday’s game; the 7-game lead the Yankees had one week ago has nearly disappeared. The Yankees sent out Masahiro Tanaka (8-4, 3.84 ERA) to face Toronto’s Marco Estrada (9-6, 3.40 ERA). Tanaka won his last outing out but pitched okay; he went 6 innings, allowed 5 hits and 3 earned runs, and struck out 3 in a Yankees 13-3 win over Boston. Estrada won his last time out as well, where he pitched 6.2 IP and allowed only 2 hits and 1 earned run against the Twins. Toronto won and completed the sweep by winning 2-0.


1st Inning
With one out and none on, Josh Donaldson drilled Masahiro Tanaka’s first pitch fastball that was middle-middle into the Yankees bullpen to give Toronto the 1-0 lead. The Yankees went down in order.

2nd Inning
Chris Colabello led off the 2nd with a single to left, but Justin Smoak’s 4-6-3 double play eliminated the threat by Toronto. Carlos Beltran gave New York its first base hit with two outs and none on, but Estrada struck out Headley and the inning was over.

3rd Inning
Tanaka sent the Blue Jays down in order. In the bottom half, Didi Gregorius led off with a single to left. Stephen Drew bunted him over but Jacoby Ellsbury could not bring him in - he popped out to Tulowitzki at shortstop. With 2 outs and Gregorius on second, Gardner came to bat - but he grounded out and the Yankees couldn’t score. Toronto led 1-0 after 3 innings.

4th Inning
With one out and the bases clear, Jose Bautista hit his 26th home run of the year and Toronto doubled its lead to 2-0. In the bottom half, Teixeira and McCann walked back-to-back on 4-pitch walks. However, the Yankees still couldn’t score because Beltran grounded into an inning ending 4-6-3 double play.

5th Inning
Tanaka sent the Blue Jays down in order. Gregorius was hit by a pitch but the Yankees couldn’t muster any offense. Toronto led 2-0 after 5 innings.

6th Inning
Both the Blue Jays and the Yankees went down in order.

7th Inning
Adam Warren relieved Tanaka to start the 7th inning. Bautista singled and Navarro walked to put runners on first and second with none out. He then hit Colabello with his 2-2 pitch. Warren out, Justin Wilson in. And Justin Wilson on fire - he struck out two and got Kevin Pillar to pop out. Top of the 7th over. No runs scored and the Yankees are still alive. In the bottom half, Beltran walked and Headley singled to put runners on first and second with one out. Ex-Yankee LaTroy Hawkins relieved Estrada to face Gregorius, his first batter. Hawkins did his job and got out of the inning with a lineout by Gregorius and strikeout by Drew. Toronto led 2-0 after 7 innings.

8th Inning
Ben Revere grounded out and after 1.1 innings, Justin Wilson was done. Branden Pinder came in. He walked Tulowitzki and allowed Donaldson to single. He struck out Bautista and Girardi made his 4th pitching change of the day and brought in Chasen Shreve. He got Dioner Navarro to ground out. Aaron Sanchez came in to start the bottom of the 8th. With one out, Brett Gardner walked on four pitches. The tying run, Alex Rodriguez, came to the plate. He grounded into a fielder’s choice and it was only not a double play because Gardner slid in hard. The Yankees remained scoreless as Teixeira struck out. Toronto took its 2-0 lead into the 9th.

9th Inning
Shreve retired the Blue Jays without issue. Roberto Osuna came in for the second time this series to try and close it out. He set the Yankees down in order and the Blue Jays won 2-0.

4. The Yankee rotation pitched okay - Tanaka, Nova, and Eovaldi allowed only 7 earned runs in 17.2 innings pitched and struck out 14.

The Yankees are now only 1.5 games ahead in the American League East. Toronto won’t be able to be this hot for the rest of the year but the Yankees really need to wake up. The offense is depending on the home run and with only one hit this entire series and no runs scoring not via the HR, the Yankees need to find other ways to score. The last stolen base for New York was by Mark Teixeira, who is arguably the slowest person on this team.