What the Yankees Should Do With Their Impending Free Agents 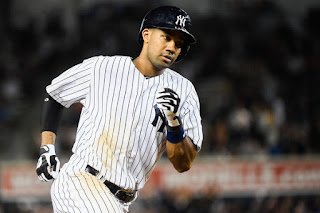 Every year during the offseason every team has to decide what to do with their players hitting the free agent market. This upcoming offseason the Yankees only have four unrestricted free agents hitting the market and none of them are big names. Although it’s still August and things can change, here is what I think the Yankees should do when the time comes.
Stephen Drew (2B/SS) 2015 Salary: $5 Million

I think we all know where I’m going to go with this. It’s already August and as of when I was typing this, Drew has yet to hit over .200 on the season. Although he is close, it’s still unacceptable, even if he does hit an occasional dinger. I’m still not sure what the Yankees plans are for Refsnyder, but with guys like Ben Zobrist and Howie Kendrick hitting the market this winter, there will be way better options.
Verdict: Let Go

Chris Young (OF) 2015 Salary: $2.5 Million
Man, imagine a world with Chris Young in it that only had left handed pitchers. Such a world like that might have Chris Young a MVP candidate. Against lefties, Young is hitting .358 with 7 home runs in 109 at bats which is pretty good. The only problem with Young is when he faces righties he’s basically the outfield version of Stephen Drew. Ouch. Overall I’ve been pretty pleased with how Young has performed in his time with pinstripes and I wasn’t quite sure he could keep up with how he did at the end of last year. With all the left handed outfielders we have it’s good to have a righty with some pop. He may not come as cheap as his current contract this winter, but if we can get him on another one year deal in the $5-$6 Million range I say go for it.
Verdict: Re-Sign

Garrett Jones (OF/1B) 2015 Salary: $5 Million
When I heard we acquired Jones from the Marlins this past offseason, I was kind of excited because I was aware of what kind of left handed power Jones had and putting that in Yankee Stadium sounded exciting. But, unfortunately Jones hasn’t been able to get anything going this year. In fact, Jones wouldn’t even be on the team if Ackley didn’t get hurt after three lousy at bats. I’m not sure what kind of backup first basemen/outfielders will be available this offseason, but I’m sure the Yankees can find a better option either in the free agent market or down in the minor leagues. Although this hasn’t worked out, I will always appreciate the go ahead home run in Seattle.
Verdict: Let Go

Chris Capuano: (LHP) 2015 Salary: $5 Million
I’m going to keep this short and sweet. Capuano was DFA’d earlier and is now in the minor leagues so we all know where this is going. We may see him again in September, but hopefully only when it’s a blow out game.
Verdict: Let Go