Where Is The Accountability?

By Chad Raines - August 12, 2015
Any functioning workplace cannot be successful without a certain level of accountability. Employees must know that if they do not perform up to their capability, there will be consequences. Unfortunately for the last couple of years, the Yankees have had no accountability. Brian Cashman has been ordained GM for life despite only winning one championship in fifteen years. Joe Girardi has been given a pass for missing the playoffs for two consecutive seasons for the first time in twenty years. It’s mind boggling to me that I STILL see people on my newsfeed apologizing for Brian Cashman and Joe Girardi (I will hereafter refer to these individuals as apologists). A couple of days ago I wrote an article in which I attempted to convey the anger of the average Yankees fan. CLICK HERE. We have now witnessed the Yankees blow a seven game lead in roughly two weeks. While the Blue Jays seem unbeatable, the Yankees have been playing mediocre, and that’s me saying it nicely. If the Bombers miss the playoffs for the third straight season, changes must be made. 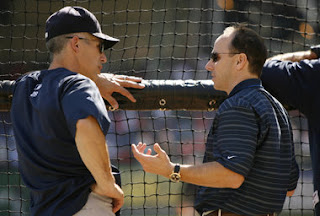 It really pains me to say this, but this Yankees team is simply not as good as the Toronto Blue Jays, and we have one person to blame for this: Brian Cashman. Aside from 2009, our general manager’s tenure in the Bronx has not been successful. Having gotten the job in 1998, all he had to do was tinker with the dynasty teams put together by Gene Michael and Bob Watson in order to win in 1998-2000. By adamantly refusing to trade any minor league talent whatsoever, Brian Cashman forfeited the best chance this team had at winning a championship in almost five years! Let’s take a minute to realize all of his prospects have been busts, aside from Robinson Cano and Dellin Betances. Remember when Cashman refused to trade Ian Kennedy, Phil Hughes, or Joba Chamberlain for Miguel Cabrera or Johan Santana? Remember when he refused to part with Ivan Nova or Eduardo Nunez in 2010 for Cliff Lee, and Lee ended up beating the Yankees in the ALCS with the Rangers? It’s a never-ending cycle with Mr. Cashman. I hope that Aaron Judge, Greg Bird, and Luis Severino are going to be studs at the major league level, but judging from Cashman’s track record there is little reason for optimism.

When you have an opportunity to win a championship, you go all out and seize that opportunity. This is especially true when you are employed by the New York Yankees, an organization with a championship or bust motto every single season.   Anybody with a brain, except Brian Cashman apparently, knew this Yankees team was deeply flawed and desperately needed improvements. In spite of glaring needs at second base and in the starting rotation, Cashman did nothing and now the Yankees are in a tailspin. It’s truly disgusting that Cashman has not been held accountable for his blatant failures, dating back to Carl Pavano, Jaret Wright, and Javy Vazquez, just to name a few. In my previous piece, I gave in depth explanations for the moves he should have made to improve the team at the deadline. I wanted David Price and Martin Prado. Since the deadline, the Blue Jays have only lost ONCE! They have become rejuvenated by the addition of Troy Tulowitzi to what was already by far the best lineup in the majors. David Price is the legitimate ace they have been yearning for, and he has been money since his trade to Toronto. They also acquired bullpen help to solidify the weakest aspect of their roster. They are just a better team than the Yankees, and any fan denying that is being delusional.

Yankees fans, we need to wake up and smell the coffee! This team is falling apart in front of our very eyes, and Brian Cashman is the number one culprit for these recent struggles. To me, it seems as if Cashman is desperately trying to prove he is the smartest man in the room. He is so desperate to see his prospects make in the majors, that he has forgotten what the number one goal is every single season: winning a championship. I’m not writing this out of pure panic, I am writing this because we are witnessing a collapse. The Cashman apologists want us to believe that losing this year is okay because our future is bright. We are Yankees fans, and we will not accept mediocrity. We need to hold the GM accountable for his egregious failures. For so long they have held on to us being in first place as the saving grace, but now they can no longer do that! The Blue Jays have officially overtaken us in the division.

Now, I must move on to Joe Girardi. Since I’ve already drudgingly accepted that Cashman is the GM for life, the manager is more likely to be canned if this team misses the playoffs. I genuinely believe Girardi is responsible for at least ten loses this season. His questionable pitching matchups, and insistence on resting players in the middle of hot streaks are unfathomable at times. If George Steinbrenner was alive and kicking there is no way a Yankee manager would keep his job after missing the playoffs for three consecutive seasons. I will admit the last few years the Yankees haven’t had the best possible team on the field, and that is mainly due to injuries, however his performance this year is flat out unacceptable. At one point, the Yankees were ahead in the division by eight games! They are now out of first place by a half game. This is a Mets-like collapse that we are witnessing. We need to hold him accountable for refusing to play small ball. Jacoby Ellsbury and Brett Gardner have not had a stolen base in over two months, the ladder of course because he is a horrendous base runner. We can no longer be dependent on the long ball as the team was early on in the season. We all knew Alex Rodriguez and Mark Teixeira could not sustain the pace they were on at their advanced age. Girardi’s refusal to play small ball is excruciatingly painful to watch. When your entire team is in the middle of an egregious slump, you have to try something different. As Albert Einstein once said, “Insanity is doing the same thing over and over again, and expecting different results.”

In only a couple of weeks this team has gone from a World Series favorite in the American League to lucky to being a wild card long shot. Any fan who is not worried is either delusional or being totally disingenuous. There is no excuse for why Stephen Drew is our starting second baseman. There is no excuse for why Chris Capuano has again rejoined this team despite being bereft of talent. Brian Cashman refuses to part ways with, or admit his mistakes, and it is very frustrating. Had Cashman done what the Blue Jays did, and improved at the deadline we would be having a totally different conversation. Brian Cashman and Joe Girardi are both hindrances to this team’s success, and must be held accountable for their performances. If the Yankees miss the playoffs for a third straight season, and the odds are growing more likely that this will be the case by the day, the two of them must be relieved of their duties. The Yankees are a first class organization, and it is about time they started acting like one.