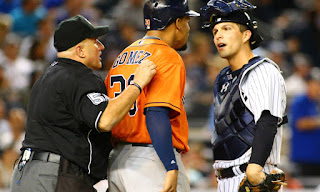 The Yankees won Game One 1-0 in walkoff fashion. Houston sent Dallas Keuchel (14-6, 2.37 ERA) to the hill to face New York’s Ivan Nova (5-5, 3.72 ERA). Keuchel is having a Cy Young caliber season with his dominance. His last four outings were all quality starts and he pitched into seven innings three out of those four times. He’s also recorded 24 strikeouts and has a 2.60 ERA in those last four starts. Nova has allowed three or more earned runs in his last three starts and hasn’t been particularly great; he is 1-2 in those starts and has a 4.24 ERA in August.

Game 2 (Tuesday, August 25) - Houston Astros 15 @ New York Yankees 1
1st Inning
Houston started the scoring with a Colby Rasmus RBI triple that scored Carlos Correa all the way from first. His seemingly innocent walk with two outs became Houston’s first run when Jacoby Ellsbury dove for Rasmus’s fly ball but it fell in front of his glove and trickled past him. Carlos Gomez’s RBI double added a second run after Evan Gattis walked. Luis Valbuena’s 2-RBI double and Marwin Gonzalez’s RBI single made it 5-0. The Yankees did not threaten in the inning.
2nd Inning
Nova set the Astros down in order. John Ryan Murphy singled but that was all from the Yankees.
3rd Inning
Nova has now retired seven in a row as he set the Astros down in order. The Yankees went down in order.
4th Inning
Jason Castro’s single and Jose Altuve’s walk put runners on first and second with one out. However, Nova got out of the inning by getting Lowrie to ground out and Correa to fly out to right. In the bottom half of the fourth, Carlos Beltran doubled to left with two outs but Chase Headley couldn’t get him home.
5th Inning
Nova’s night ended as Evan Gattis, with Rasmus on second, hit a 2-run home run to make it 7-0 Houston. Nick Rumbelow came in for New York. Marwin Gonzalez’s solo home run and Brendan Ryan’s error led to an eighth and ninth run, respectively. The Yankees went down in order.
6th Inning
Chris Capuano relieved Rumbelow and worked through the inning successfully. The Yankees went down in order.
7th Inning
Houston made it 15-0. I’m not really sure how to describe this inning without a horrendous play-by-play so I’ll keep it brief. Basically, Capuano walked three batters, Gattis had a 2-RBI double, and Carlos Gomez hit a 3-RBI home run and that became another six runs for the Astros. Keuchel struck out the side.
8th Inning
Brendan Ryan (yes, the backup infielder!) came in to pitch for the Yankees. He allowed two singles but he got out of the inning without allowing a run! Excellent job. Vincent Velasquez came in for Houston and set the Yankees down in order.
9th Inning
Brendan Ryan set the Astros down in order. Props to him for saving the pen and for pitching two scoreless innings. Greg Bird’s RBI fielder’s choice groundout led to the first run.

Game 3
Not much to say about last night’s disaster. The Yankees sent Michael Pineda (9-7, 3.97 ERA) to the hill to face Houston’s Collin McHugh (13-7, 3.96 ERA) in an attempt to win the series. Pineda is coming off of the DL after suffering a forearm injury in late July. He had lost his last two starts before going onto the disabled list. McHugh has allowed one earned run in three of his last four outings but hasn’t won since August 2nd. In August, he has a 1.67 ERA and has struck out 26 in 27 innings.

Game 3 (Wednesday, August 26) - Houston Astros 6 @ New York Yankees 2
1st Inning
Jose Altuve singled to start the game but Colby Rasmus struck out looking with Altuve on third and two outs. Carlos Beltran singled with one out but the Yankees could not do anything either.
2nd Inning
Evan Gattis’s home run to right gave Houston a 1-0 lead. Didi Gregorius and Chris Young hit consecutive singles with two outs but Stephen Drew’s soft lineout led to another RISP fail and the end of the second.
3rd Inning
Both the Astros and the Yankees went down in order.
4th Inning
Stephen Drew made a nice 4-3 double play on Gattis’s grounder up the middle to end the top of the fourth. Chase Headley singled with one out but Collin McHugh stymied the Yankee offense.
5th Inning
Carlos Gomez and Luis Valbuena had consecutive singles and there were runners on first and third with none out. Jake Marisnick’s safety squeeze led to a bunt single to make it 2-0. Altuve’s sacrifice fly made it 3-0 and Pineda’s day was over. Houston added two more runs on a RBI single and a Shreve wild pitch before the top of the fifth was mercifully over. The Yankees went down in order.
6th Inning
Branden Pinder came in for Shreve and worked through the inning successfully. The Yankees had Beltran on third with one out but neither Brian McCann nor Chase Headley could get him home.
7th Inning
The Astros went down in order. The Yankees FINALLY scored more than one run in the game this series as Didi Gregorius, with Greg Bird on first from a leadoff walk, homered to right to cut the deficit to 5-2. With one out, Tony Sipp relieved McHugh and finished the inning.
8th Inning
Adam Warren came in for Pinder to start the eighth. Evan Gattis launched his second homer of the day, this time to left field to make it 6-2. Pat Neshek relieved Sipp in the bottom half of the eighth when Sipp walked Beltran to start the inning. He walked Headley and the next batter, Bird, hit the ball DEEEEEP to right center but Marisnick caught it and the eighth was over. 6-2 Houston at the end of eight.
9th Inning
Nick Goody, recalled today from Triple-A Scranton, relieved Warren. He worked a scoreless inning. In the bottom of the ninth, Will Harris came in for the Astros and pitched a 1-2-3 inning.

MY TAKES
Player of the Game: Evan Gattis (2-4, 2 HR)
1. The Yankee offense scored only 4 runs all series, batted 15-91 (.165), and were 0-14 with runners in scoring position; once again, the offense has cooled. For an offense that surged all year, it’s finally coming back to Earth and showing all Yankee fans that they need both pitching and hitting to work simultaneously for them to win games. It’s a shame that this had to happen but for all the Yankee fans out there that believed this offense was World Series-quality, it’s nowhere close to that.
2. The Yankee pitching gave up 21 earned runs in their last 18 innings pitched (10.50 ERA); they managed only 6 strikeouts in the last two games and gave up 25 hits.
3. For what was an abysmal series and downright impossible to watch, Nathan Eovaldi was a rare bright spot. He is 13-2 on the year and his ERA has dropped all the way down to 4.00. He has 22 strikeouts in his last 26.2 innings pitched, all in the month of August, and batters are only hitting .204 against him. He’s definitely improved and is the #2 starter of the Yankees, behind Masahiro Tanaka.
4. The Yankees should be disappointed in themselves as Houston won its second road series win since April. The Astros came in with the third-worst road record in the American League and yet took 2 out of 3 in the Bronx. (Source: Michael Kay & YES Network)
5. Carlos Beltran is the only Yankee offensive player who has done anything productive as of late. In his last eight games, he’s gone 8-24 (.333) with 3 walks, 3 doubles, and 7 RBIs.

LOOKING FORWARD
The Yankees will travel to Atlanta to start a 3-game interleague series against the Braves at Turner Field. Masahiro Tanaka (9-6, 3.61 ERA) and Williams Perez (4-4, 4.76 ERA) face off at 7:35 PM ET on Friday, Luis Severino faces Matt Wisler on Saturday at 7:10 PM ET, and Nathan Eovaldi faces Julio Teheran in Game 3 and the finale at 1:35 PM ET. The Yankees must continue to keep pace with Toronto in the American League East.