Yankees Lose 3-2 Despite Dinger From Rodriguez 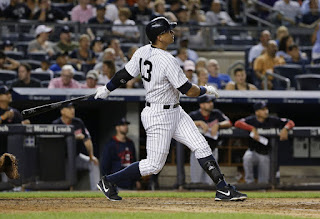 The Yankees were coming off of a 3 game sweep over the Minnesota Twins when they faced off against the Cleveland Indians at home yesterday. Looking for their 4th straight win, Ivan Nova started on the mound facing off against Josh Tomlin.


The first run of the game came in the top of the second inning when Carlos Santana walked, and Lonnie Chisenhall doubled to score him from first. The Yankees then got 3 straight outs to end the inning. The score was 1-0.

The Indians got another run in the top of the third inning. Jason Kipnis singled and moved to second on a ground out to Greg Bird at first. Then Michael Brantley singled to left to score Kipnis and make it a 2-0 game.

The Yankees first hit, and first base runner came in the 3rd when Headley doubled to lead off the inning. They got runners over to second and third with two outs but were unable to score.

The Indians scored again in the top of the fourth inning, the third inning in a row that they scored. Abraham Almonte walked with one out, followed by Giovanny Urshela and Jose Ramirez getting back to back singles to score Almonte. The score was 3-0.

Alex Rodriguez hit his 26th home run of the season to lead off the bottom of the 4th inning and make the game 3-1.

The Yankees only had 2 runners on base in between the 4th and the 9th inning, and both were Stephen Drew, on a walk and a single.
In the 9th inning, Alex Rodriguez led off with a single and stole second base. Carlos Beltran singled him in to make the score 3-2. The Yankees would not score any more and would lose 3-2.

Ivan Nova threw 5 innings and allowed 6 hits, 3 earned runs, struck out 4 and walked 2. Adam Warren and Chris Capuano both threw 2 innings in relief, both only allowing 1 hit and no runs.