By NYY v BOS - August 01, 2015
What a year from Mark Teixeira. There's a good chance I'm his biggest fan and I have vehemently defended him in past years against accusations that he's injury prone or just a bad hitter. Well, this year Tex is making those doubters look like fools. But even I couldn't have expected performance on this level. 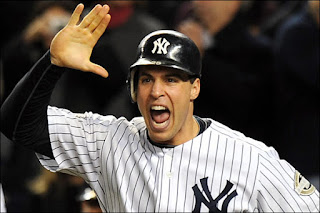 Tex is slashing an incredible .269/.375/.585 showing his ability to get on base and hit for both power and average are there.

Simply put, Teixeira is amongst the league leaders in very important offensive statistical categories and all you have to do is watch one Yankees game to see his world class defense. He literally makes the whole infield better by saving errors and making plays no other first basemen could. He's the best defensive first basemen in the league and that's the bottom line.

These factors make him a very real MVP candidate assuming he continues to perform at this level and his underachieving .252 BABIP suggests that he might actually get better.

The roadblock to his MVP journey is pretty obvious: Mike Trout. Trout has been phenomenal since breaking into the league and is rightly leading the MVP race this year as he would be a triple crown threat if his teammates could get on base to be driven in more often.

Here's the thing though, Teixeira just has to keep it close. Over the last few years we've found that MVP voters have a disposition towards voting players on playoff contenders in over those who aren't on contending teams, as evidenced by Ryan Braun over Matt Kemp in 2011 or even Miguel Cabrera over Trout himself in 2013.

The Angels are falling from the sky right now as they've lost four straight and with the Astros beefed up roster I highly doubt the AL West race will even be close. Outside of Trout and Pujols there's not much consistency in their lineup and while their pitching hasn't been bad it hasn't been spectacular. There are eight teams in the American League wild card hunt and they're all separated by 3.5 games. You have to figure the Blue Jays will snag one of those spots thus LAA will be fighting seven other teams for a playoff spot and they just might not make it.

Let's just go ahead and say the Angels miss the playoffs and the Yankees make it. That's a leg up for Tex right there. Teixeira has been the biggest offensive force on the team (with all due respect to Arod) and without him, it could be speculated that the team might not make the playoffs (keep in mind he's been good for over four wins over replacement level). The 2011 NL and 2013 AL MVP races show us that the precedent has been established that when it's a close race, the winner is the one on a contender.

Right now Tex only has four less HR, has more RBIs & walks, and has 30 less strikeouts than Trout, so it's already a tight race. Coupled with the fact that Trout has an over inflated .350 BABIP and is due to regress, we find that Teixeira and Trout might make for a very interesting MVP race the rest of the way.

Some may try and assert Donaldson for MVP, but aside from average, Teixeira currently outranks him in every other statistical category. As I mentioned earlier Tex's BABIP suggests he we will not only maintain but improve on his performance. It's also hard to stand out and claim MVP when you're on a team with a bunch of other right handed power hitters. I'm not worried about Donaldson.

I know there's a lot that needs to go right for Teixeira to win the MVP and I'm not saying he absolutely will. The point is to highlight just how well Teixeira is playing this year and that he does have a realistic chance to win it assuming those thing go his way. We still have a lot of baseball left to play and anything can happen, so let's root Tex to keep slugging and prove Arod right when he called Mark the "MVP of the league'"

By: Nick Scott
All Stats Provided Via FanGraphs and Baseball-Reference
Follow us at @BronxBomberBlog & @TeixeiraFanClub
Nick Scott Opinion