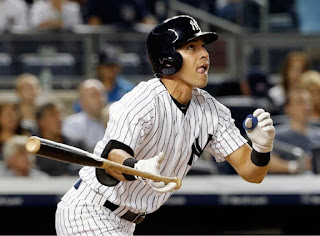 This game was the rubber match of the series against the Red Sox. It was very important for the Yankees, trying to stay at least 4.5 games in front of Toronto before going into a 3 game series with them. CC Sabathia started on the mound for the Yankees against Eduardo Rodriguez of the Red Sox.

The first run was scored in the bottom of the 3rd inning with 2 outs. Both Brendan Ryan and Jacoby Ellsbury were called out on strikes to start the inning off. Then Brett Gardner hit a single followed by Alex Rodriguez who hit a double to score Gardner and take the lead 1-0.

The next run was in the top of the 5th. Sabathia was still pitching for the Yankees. Ryan Hanigan singled with one out. Then after a strikeout, Sabathia walked Jackie Bradley, moving Hanigan to 2nd. Rusney Castillo then hit a single to score Hanigan and tie the game at 1.

Xander Bogaerts walked after Castillo hit the RBI single, and David Ortiz came up to the plate with 2 outs and the bases loaded. CC Sabathia struck him out and ended the inning with only one run scored.

In the top of the 7th, Justin Wilson replaced Sabathia on the mound. Sabathia finished with 6 innings pitched, 3 hits, 1 earned run, 3 walks, and 8 strikeouts.

In the bottom of the 7th, Jacoby Ellsbury came up with one out and hit a solo home run to put the Yankees up 2-1.

Dellin Betances threw the 8th inning and Andrew Miller threw the 9th inning, both of them allowing 1 hit in their inning. They didn't allow any runs, and Justin Wilson picked up the win, and the Yankees won 2-1.

MY TAKES:
The Yankees offense didn't really show up in games 2 and 3 of the series like it should have. 2 out of 3 games is still good going into the Toronto series. Sabathia has been throwing pretty well his last few starts, something that hasn't happened very often this year, but if we were going to see the old CC late in the season would be a good time for it. Luis Severino looked very promising in his debut. I think he can bring a lot to the Yankees and get them a few wins as the season winds down.

LOOKING FORWARD:
The Yankees will face off against the Blue Jays at home for a 3 game series. It will be a very big series, since the Yankees go into it with a 4.5 game lead over the Jays. The pitching matchup in game 1 will be Nathan Eovaldi throwing against knuckleballer R.A. Dickey. Game 2 will be Ivan Nova against David Price. Hopefully the Yankees can keep hitting Price like they have the past couple times they saw him. Game 3 will be Masahiro Tanaka facing off against Marco Estrada. A series win would be very big here, as they play the Blue Jays 13 more times this season including this weekend series.